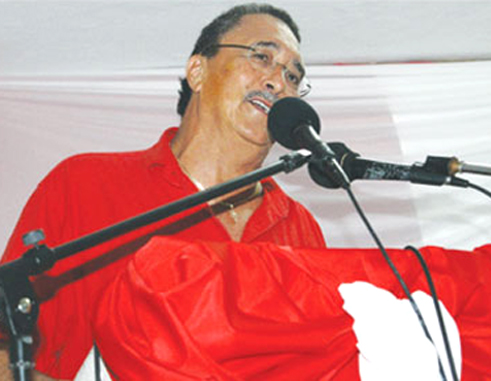 LAST weekend’s newspapers reported Kenny Anthony’s speech at the convention of his St. Lucia Labour Party. Appropriately, most focused on his stupid statement that the next elections will be fought between the SLP and the Chastanet family.

The Star devoted an entire double spread to an analysis of Anthony’s speech and of his propensity for diversion and lies rather than talking truthfully. It is impossible for anyone who read Rick Wayne’s ‘Kenny declares War on Chastanets’ not to appreciate that that declaration came from the mouth of an unthinking buffoon; one who had not had the benefit of proper socialization.

It was low politics unbecoming of the modern era! For my part the foolish statement was Anthony’s last desperate throw of the dice. It was a cover-up for his government’s dismal failure. Nothing which he promised has been fulfilled. No jobs! Jobs! Jobs! In fact, more jobs have been lost in the last three years than at any other three-year period since independence. The promised $100,000,000.00 ‘for immediate investment’ we are now told comes from his punitive VAT and other taxes.

Notwithstanding Rick’s comprehensive and historical explanation of the deceit and desperation of Anthony and his fellow liars in the Star newspaper, it was the editorial of the Voice newspaper of that weekend (Saturday 6, December 2014) which will go down as one of the most scathing attacks by that newspaper on any serving Prime Minister. The Voice is well over one hundred years. It has demonstrated a propensity to work with the government in office and more often than not sings praises even while others hip scorn and ridicule.

In my own weekly piece in the weekend Voice of the above date, I veered clear of Anthony’s desperate moronic statement preferring to focus on the true and correct cost of the Bois d’Orange Bridge. I even suggested a Truth Commission to get to the bottom of the cost of that bridge. Besides, I saw that attack by Prime Minister Anthony on the Chastanet family as a desperate bid to divert attention from his failed policies which has plunged Saint Lucia deeper into the morass of debt and closer to the hands (and jaws?) of the International Monetary Fund (IMF).

If there is one more note which may have been added to Rick’s masterful article on Anthony’s speech it is that if Anthony and Michael Chastanet were to stand naked me thinks it would be Anthony who would be mistaken for a true blood white man. Strange, right? Unfortunately, it was not the first time Kenny Anthony had employed such diversionary tactics to suit his narrow political agenda. Here are some examples of his diversionary tactics and the lies which accompanied them. Following the 2011 elections he decided to implement the punitive Value Added Tax (VAT) which he had vehemently criticized calling it ‘an oppressive and punitive tax which would hurt the poor.’ He cunningly held a public meeting in Dennery at which he attacked Richard Frederick, a former Minister for Housing, fabricating innuendoes and untruths. That was in October and VAT was implemented that December.

Then when he wanted to remove subsidies on sugar which he knew would make the product more expensive for all consumers, including his misguided ‘maleaux,’ what did he do? He went on a week-long attack on Guy Joseph, immediate past Minister of Works, accusing him of using government funds to enrich his brothers, by renting their back hoes for government jobs. The idea was to take the peoples’ eyes (and minds) off the increased price of sugar. All of a sudden sugar which has served us for well over one hundred and fifty years became our number one enemy with Anthony leading the attack, hypocritically blaming diabetes.

Guy Joseph, whom he had chosen for special attack, perhaps because he hated the East Indian portion of his and Guy’s ancestry, was again used to divert attention; this time it was at the 65% (sixty-five percent) increase in water rate. The same water which he had taught his supporters to say was from God and ought to be free. Besides, no foreigner should participate in its procurement, treatment and sale, according to the SLP. They damned the dam and even criticized Compton for building it. Poor Guy Joseph was once more the target of their attacks. It was a trick pulled from the bag as diversion. The repetition was deliberate!

The bag of diversion and desperate lies had not been exhausted. Up comes the third anniversary of the elections victory of November 2011. Three years of a five-year term ought to be a time to honestly and scientifically access the policy direction and the performance of the national economy. Instead of a straight forward and truthful address to the nation and to his party convention, all we had from Dr. Anthony, the party leader and prime minister was more lies, more deception and more buffoonery. For once his physiognomy let him down. Off the television cameras he looked old and haggard. His supporting cast at the head table looked equally old and haggard. Perhaps they had the death of a friend on their collective minds. Or perhaps it was just worry over the fact that the old tricks and lies were no longer working. The people are awake and alive. God bless them!

In desperation he pulled out the Chastanet family name. It was not the first time Kenny Anthony had attacked the Chastanets. Many believe that his earlier attacks on Michael Chastanet (Allen’s father), may have contributed to the sale of that family’s assets in the supermarket business to the Trinidad firm of Neal and Massey (‘Massy’). The earlier attacks came at the time when his government could not explain the ‘gift’ of three million dollars to LIAT or the reason his government did not abolish the ‘nuisance taxes’ which were to be replaced by VAT.

Add all this to sale of the Bank of Saint Lucia (BOSL) to Trinidad. Now our major supermarkets are in the hands of Trinidadians. What next? Will we wake up one morning and find the red, black and white flag of Trinidad and Tobago hanging over government buildings? We must rid ourselves of these masters of deception and desperate liars before they spread more poverty, crime and suicides.