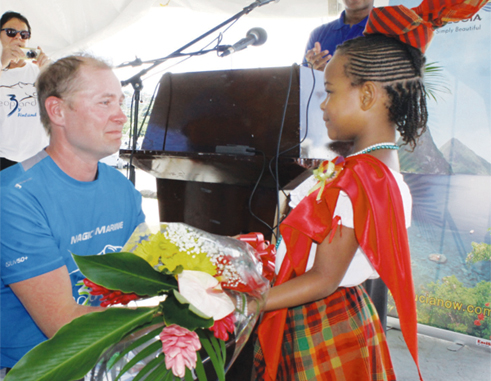 THE Atlantic Race for Cruisers (ARC) has been a fixture on Saint Lucia’s yachting calendar for a quarter of a century. Although its economic impact in dollars and cents is yet to be thoroughly documented, it has not really consumed the island like the Jazz Festival for instance.

And like the Jazz Festival, the ARC has its side events, usually called fringe events. One fringe event of the ARC is the Flotilla which sets sail from the Castries Harbour at the same time the ARC kicks off in Las Palmas, in the Canary Islands.

ARC organizers are conceptualizing the Flotilla alongside that of the Jazz festival opening. In other words, they are saying that what the opening of jazz is to the Jazz Festival is exactly what they want the flotilla to be to the ARC.

Tourist Board’s John Emmanuel (PRO) and Dahlia Guard (Special Events Manager) explained the new thinking behind the ARC, the Flotilla and the impact the Board would like those two events to have on the country.

The sellout crowds at the opening of jazz, which create the atmosphere fever that grips the country, add to the excitement that is built in the two weeks of the music festival.

This is exactly what the Board wants for the ARC and is positioning, or has started positioning the flotilla to be its “jazz opening” for the ARC.

The Board held its 9th flotilla event three Sundays ago, and Emmanuel and Guard insist that this year’s flotilla was different, bigger and more enjoyable than its predecessors.

“It is 25 years now that we have been able to keep the ARC, maintain it and sustain it. In 2014 we are making a quantum leap in terms of stepping up how we coordinate and how we deal with the ARC,” Emmanuel said, adding that the ARC had almost been relegated to a life of its own.

“We changed that around this year. We began planning for the ARC,” he said.

This year marks the 25th year of the ARC’s coming to Saint Lucia, a milestone that has not been easy for the Tourist Board, after taking it away from Barbados. Even Emmanuel admitted that holding the ARC for that long “has been no easy feat”.

World Cruising Club, the ARC’s main organizing body is still happy with the Tourist Board. Regarding the flotilla, it is still looked at as a new event, a fringe event of the ARC but one that continues to grow, according to Emmanuel.

“Like everything else there is room for improvement, room for change”, Emmanuel said, in respect of the Flotilla.

The new thinking behind the ARC and Flotilla is to make it more community participatory, meaning to get more people from communities across the island involved in both events and to make the IGY Marina a livelier place during the ARC days. And as for the day the Flotilla is held to keep the marina alive for the entire day instead of for an hour or two.

Emmanuel admits that planning for this year’s events (ARC and Flotilla) started earlier than previous years; there was greater collaboration among stakeholders, a more intense meeting of the minds between the Tourist Board and IGY Marina.

He said that unlike previous years, the Tourist Board, this year, reached out to the media in a fantastic way in that there was more advertisement about the Flotilla in the media; new media partners came aboard not just to report on the event but as partners, gold partners at that. Further, more events were advertised in an effort to generate widespread interest in the ARC and the build up to the Flotilla.

“For the first time in the history of the Flotilla we had a title sponsor for the event. Mercury, known for their engines endorsed the event so it became the Mercury ARC Flotilla,” Emmanuel said.

He added: “We increased the sponsorship across the board and we had more people on board; we stepped up the event in so many ways. For the first time we engaged spectators with a spectator boat. We had three party boats in the flotilla.”

Guard, who recently joined the Tourist Board, spoke of the Board injecting a party spirit in this year’s Flotilla referring to it as the Mercury ARC flotilla Start Party.

“Last year’s Flotilla was not called that. What we tried to do this year was to generate more local interest in the ARC by getting the Flotilla more interesting, Guard said.

She added that Mercury was very excited when the idea of being a title sponsor for the Flotilla was broached to them.

She said this year’s Flotilla far surpassed last year’s in the number of activities that were set up on the Marina grounds for the enjoyment of participants and entertainment which lasted for the entire day compared to last year’s which ended at 1:00 p.m..

“We’re hoping to tweak the Flotilla and other ARC events to increase public interest in both, as well as other events that make up the ARC calendar,” Guard said.