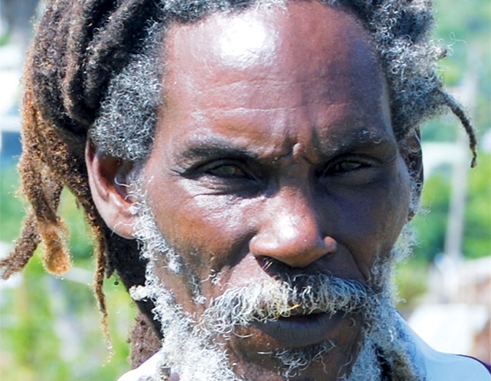 His name is Henry Pierre affectionately known as ‘Jah D’, the man who for 40 years has taken care of the Dennery playing field.

I met up with Pierre during the Woulelaba finals between Barre de Chaussee and Belfond, and our conversation quickly moved to his long career. Pierre spoke about how, when and why it all started: “I am the head man for the Dennery Cricket Ground (DCG) and I have been there from 1974. I must also tell you that I played local cricket for the Dennery Village from 1969.

“Based on my involvement in the game and my expertise as a curator I decided to take up the challenge as groundsman. At the time it was a voluntary job and it was because of my love for the sport of cricket.”

Pierre said from 1974 the village of Dennery has suffered several floodings brought about by adverse weather conditions and that has affected the playing field. During that time members of the community have used their own resources to ensure that the grounds remained in tip top shape for cricket.”

He continued: “For the last two years we have had support from the NICE programme, but there are three major areas that need urgent attention: surface levelling, fencing and lighting. As you are aware lighting is the in thing now in terms of sports development, and the village of Dennery over the years has produced a number of outstanding sportsmen and women”

“One of the reasons this ground is kept in such good condition is that football is not played here but at the other field nearby. Subject to correction apart from the SLNCA facility in TiRocher Micoud (Beauchamp Cricket Ground) the Dennery Playing Field is used specifically for cricket compared to the Mindoo Philip Park, the Beausejour Cricket Ground, the Gros Islet Playing Field and the Soufriere Mini Stadium where football and cricket are being played”.

Pierre made a special plea to the authorities to look at this facility and see it as a national asset and not just a Dennery thing.

He continued, “We need assistance. We need a storeroom for the various pieces of equipment that we have. We need a driving lawnmower and other amenities for the ground. I simply hope the relevant stakeholders will hear about our request”.