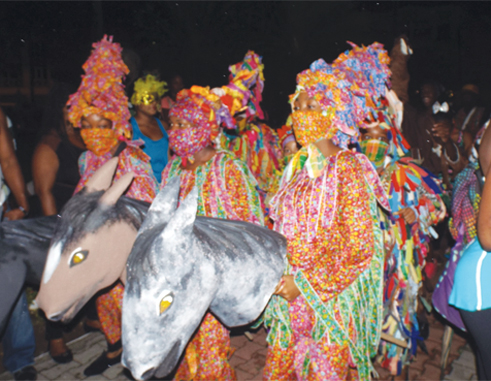 THIS  year’s recognition of St. Lucy’s Day with the annual Festival of Lights was indeed an illuminating affair which drew massive crowds to the Derek Walcott Square last Friday night and even with the occasional rainfall, did not disappoint.

The event which is seen as the official opening of the Christmas season was also held to commemorate St. Lucia’s National Day celebrated on December 13.

Hundreds of people assembled peacefully to observe the traditional lantern presentation and awards ceremony which showcased the sheer talent of locals, young and old with their creative pieces.

They were also treated to a number of performances by dance groups and singers including the LapoKabwit Drummers who ushered the lantern participants into the Square, the Royal St. Lucia Police Band, the Silver Shadow Dancers and the New Stars Dancers.

Then the big names came out to play with performances from the likes of veteran songstress, Deredee Williams alongside Barbra Cadet, the Invader, Nicole David and Ricky T Medley who did a Lucian creole Christmas soca medley and AiashaGustave who sang a sultry version of Sugar Aloe’s “Black Cake”.

Then came the culminating switching on of the lights and fireworks display which went off with a BANG literally.

To add a cherry to the well iced cake, a special procession of floating lanterns to the Waterfront was arranged by the Cultural Development Foundation where lanterns were available for purchase at $5 and were placed in the calm waters with the hopes of floating away into the darkness along with the troubles of yesterday.

In all, Friday’s events proved to be successful and ran as smoothly as a well-oiled machine.