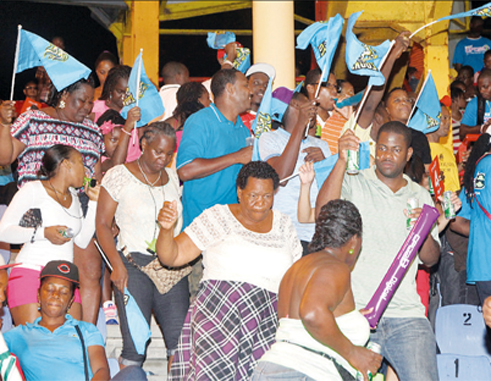 A new, independent economic impact study has revealed that the Caribbean Premier League injected a massive US$166 million into the region’s economy during the 2014 tournament – a significant increase of 58% in 2013.In St. Lucia the impact was nearly US $14 million.

Host country for the finals, St. Kitts and Nevis, reaped significant benefits with a whopping US$25.1 million invested in the local economy, second only to Barbados with US$28.7 million.

Key findings in the report show:
• Incremental spend by regional and international fans totalled US$47.4 million (excluding accommodation and airfares)
• An estimated 217,176 regional and international spectators watched CPL 2014 live
• The international TV audience increased to 65 million in 2014 from 36 million in 2013, with 29 broadcasters from around the world airing the games live
• Over 21,500 international visitors (approximately 10% of total spectators), attended CPL 2014, spending US$7.9 million
• Thousands of new jobs were created in tourism and travel across the region by CPL and more than 156,000 jobs positively impacted
• The tournament’s high profile international broadcast media campaign (which encouraged tourism in the region) generated US$4.47 million in advertising value

Commenting on the findings, Caribbean Premier League CEO, Damien O’Donohoe, said; “These results are fantastic and are a testament to CPL’s significance as an economic driver in the region. While we have always said that the Caribbean is without doubt the natural home of T20 cricket, we are very proud to say that CPL is now a truly international event – appealing to fans and players from around the world – and one that the people of the Caribbean should be very proud of.

“With next year’s player line-ups close to being announced, we are very excited by the prospect of smashing these records in 2015 and further cementing CPL’s position as the most entertaining and exciting cricket tournament in the world,” concluded O’Donohoe.

With an investment of over US$25 million to date, the CPL is the world’s second biggest T20 cricket tournament – behind the Indian Premier League – and is set to continue growing in 2015 and beyond. CPL, in partnership with the West Indies Cricket Board (WICB) continues to invest in the development of the game, providing opportunities for players and fans to access world-class cricket in the Caribbean.

In order to gather appropriate information to calculate the projected Total Economic Impact of CPL on the Caribbean economy, SMG-Insight/YouGov hosted an online survey on http://cplt20.com/ where cricket fans could access an online questionnaire. To incentivise participation in the survey, cricket fans had a chance to win an exclusive signed shirt and 1,809 respondents from across the Caribbean took part in the survey.