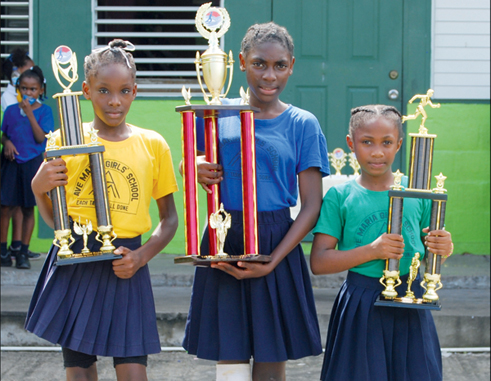 THE two may well be the future running stars in St.Lucia and by extension the Caribbean Lianna Frazer representing Egan and Magella Joseph representing James out-ran the competition to take home the 2014 Ave Maria Primary and Infant School road race titles on Thursday.

In the infant category which was a 1 Kilometre saw 33 runners competed. The top four made their way through the gates of the Mindoo Phillip Park next to the Marchand Grounds in that order: No.26 Magella Joseph (James), Merkala Gaillard (Alcide),No.1 Liana Jean (Du Boulay) and Dawn Hamlin (Alcide).

The Primary School students ran over a distance of 3.2 kilometres that took them through Marchand Grounds, along the Marchand Road, into Independence City, up, then down the Bocage Hill, onto Water Works Road, run pass Adelaide’s Home, pass the Entrepot Secondary School and return to the Marchand grounds.

Frazer who finished 3rd las year took charge of the 100 participants on the home stretch this time to finish in a time of 19 minutes 20.57 seconds. Second was No.26 CherfranWilkie (Phillip) in 19 minutes 34: 82 seconds, No.51 Shania St.Pierre (Pierre) was third in with a time of 19 minutes 53: 26 seconds. Fourth across the line was No.5 Naekeisha Louis (Egan) finish in 21 minutes 09.76 seconds, while No 52 SonayaLamontagne (Pierre) came in fifth in a time of 21 minutes 10:07 seconds respectively.

Frazier who spoke to The VOICE just for a brief moment following her first victory at that level said, “I am happy that I won and collected points for my house (Egan). I had a good race despite the hills”. The eleven old said that her early preparation leading to the event was an important factor.

Meanwhile, the Ave Maria Infant and Primary School will stage their annual fun sports and track and field championships in January at the Mindoo Phillip Park.