I heard a news item that suggested that we should not worry as much anymore about Chikungunya because its rate of infection has decreased. I was tempted to say ‘Bravo!’ but still suffering from the after-effects of that still untreatable disease, I thought I should avoid believing anything that makes me, or fellow victims of ‘the chikun thing’ complacent. I didn’t want to make the mistake of saying okay, Chikungunya is going, so let’s forget about it and look out for Ebola now.

Wake up, folks. Let’s be real. Try as we may to stop it, Ebola can eventually get its way into the Caribbean, Saint Lucia included. We hope and pray it won’t. But in the meantime, we’re getting ready for that possible unwelcome eventuality. We’re already rehearsing ‘first case’ scenarios on how to treat ‘any first case’ that eventually shows its head. But even so, we also need to look further at worst case scenario’ of Ebola taking hold like AIDS did. As such, we have to start facing the hard facts for if and when it happens.

Taking all the above into consideration, the first question is: If Ebola hits here and the global pharmaceutical industry does indeed come up with a working cure, will we be able to afford it?

After AIDS wreaked havoc in Africa and the south before spreading north to the west and the east, the global companies eventually came up with the Anti Retro Viral (ARV) tablets to treat victims detected early enough. But at US $15,000 per year for treatment on the US and European markets, it was way beyond the reach of victims in Africa and Caribbean, which had been identified as the world’s worst AIDS-affected regions. 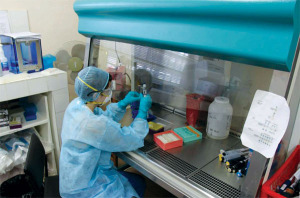 Pharmaceutical companies in India developed and produced the same ARV drugs and were prepared to make them available at a much cheaper and affordable cost of US $350 per person, per year. But the pharmaceutical giants wouldn’t allow them to. The big American and European drugs companies waved their patents in the air and outlawed any exports of ARVs by the Indians to African companies and governments willing to buy. They even moved to have shipments to Africa seized by Customs.

The global pharmaceutical companies argued they were in the business of making drugs and medicines, not to save African (or Caribbean) lives, but to make profits. If the ARV tablets were made available to Africans at US $350, they complained, they would then no longer be able to sell the same drug to Americans at $15,000. The arithmetic didn’t add-up to sufficiently increase their profit margins, so they simply considered selling medicine cheaper to save more lives was bad for business.

Some African governments amended their laws to allow entry of the cheaper ARVs, but the pharmaceutical giants struck back hard: they put the power to police their patents in the hands of the World Trade Organization (WTO), which makes trade in this particular cheaper AIDS medicine globally illegal.

Because the global pharmaceutical companies put profits before people (as always), millions of AIDS victims the world over who could have been saved were and are still being left to languish and die. Today, as a result of being unable to afford the high cost of treatment, 18 million AIDS victims either die or are condemned to death each year. Today too, the world is threatened by Ebola, even as we still remain in the grips of a Chikungunya attack that still hasn’t been fully understood, is still without treatment – and still hasn’t gone away.

Looking at the current twin (Chikumgunya and Ebola) health crises affecting the region, let’s fast-forward our imagination to a worst case scenario one year down the road.

By the end of 2015, with thousands (if not millions) having possibly perished the world over due to the late global response the world will be looking to the big pharmaceutical companies to make cures available as far and wide as possible. But given their approach to AIDS, will they be willing to make cures available at cheaper rates more affordable to the average poor?

On the other hand, if the global drugs companies refuse to reduce to lower prices for Ebola medicines will poor states ever become able to afford to mass-purchase them for poor victims? And if countries like Saint Lucia have to make deep austerity cuts to raise the funds needed for the more expensive drugs, will citizens be willing to endure the consequences?

There are always more questions than answers, but all these questions will still have to be asked; and answers to all will also have to be found — today and not tomorrow.