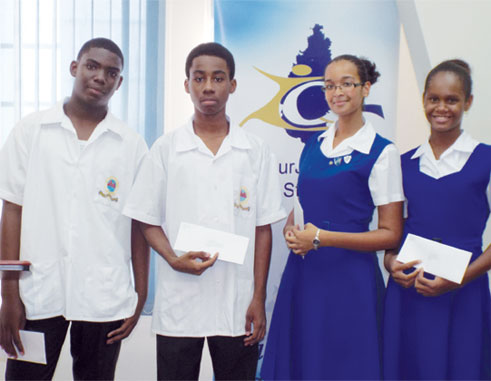 SIX students learnt that hard work really does pay off on Monday when they received cash scholarships form the Insurance Council of St. Lucia.

The cash awards of $1000 were handed out to the children of members of the insurance industry for the school year of 2014-2015.

Vice President of the ICS, Alvin Malaykhan told The VOICE that this initiative has gone on for 12 years and was put in place to reward the students who successfully completed the Common Entrance Exams.

Malaykhan said the Insurance Council is not all about collecting money. Giving back, he said, is one of the many positives of the industry.

He said: “It is something which is vital to sustain an economy”. He added; “It’s really a diverse industry and we try to contribute to education”.

President of the ICS, Claudius Francis urged parents to continue to encourage their children to keep up the studies and good work.

Francis said it was heartening to the Council to see the way that every scholarship recipient has returned to say thank you.

He said, “That’s all we ask for. Just make sure that you do your school work as best as you can”.

Four out of the six students were present to receive their scholarships.