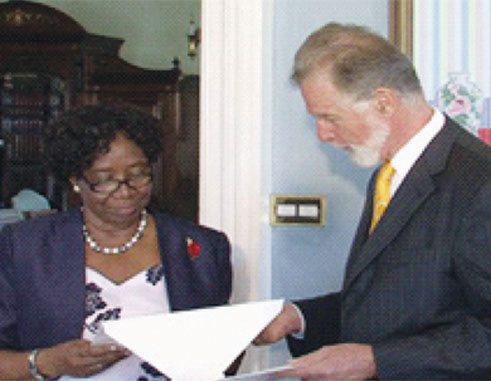 SOMETHING quite significant happened here this past Tuesday.

On the very same day the world observed the 100th anniversary of the First World War and the date of the signing of the armistice that brought peace at the end of the Second World War Germany’s new Ambassador to Saint Lucia and the OECS presented his credentials to Saint Lucia’s Governor General.

In fact, accepting the new German envoy’s credentials was the very last thing Her Excellency did before leaving her official residence at Government House to attend the special centenary ceremony at the Alliance Francaise building at Pointe Seraphine.

Ambassador Dr. Lutz Gӧrgens’ first official assignment here, therefore, turned out to be him standing at attention in two minutes of silence for Saint Lucian and other Allied victims of the two world wars, many killed by German bombs and bullets.

The event was significant in terms of its programme, involving speeches, an exhibition, an interesting feature film by a local producer all in the presence of representatives of surviving local volunteers and diplomats from Britain, France and Germany.

Several speakers, noted the significance of the German ambassador’s presence. The French Ambassador and his German counterpart both noted that while France and Germany were at war in World War II they today share membership of the European Union and offices in the same building in Brussels. Where France was a battlefield 69 years ago, it was now promoting peace and supporting four years of study of the perils of war and possibilities for peace. And barracks built for war in Saint Lucia now house envoys for peace and institutions of learning.

I listened to the speakers with interest. The Governor General called for more to be done to study and tell and show more about the actual roles – or lack thereof – and contributions of West Indians to the two world wars. The Resident British High Commissioner recalled his father fought in the Cheshire Regiment and returned home only to die at 41. And the German ambassador sounded very much like he was pleased to have been able to share the solemnity with other EU allies in this part of the world on this important date.

As I listened to the German envoy, I recalled that the Franco-German alliance during World War II had resulted in German submarines based in neighbouring Martinique scouring Caribbean waters hunting allied warships, one of which did bomb two vessels in the Castries harbour. I’d always heard too (but have never confirmed) that a net stretched across the entrance of the Castries Harbour from Tapion to Vigie was either cut or loosened by a Germany spy here with a distinctly haughty German name. But as a child I did read a Letter to the Editor in an issue of The VOICE newspaper here written by the captain of that German submarine. He’d quietly visited Saint Lucia and after a day around the port he’d torpedoed, he’d penned a letter of apology to Saint Lucians for his act of war that cost many lives.

I watched and listened to the granddaughter of the late St. Lucia Ex-Services League Secretary former Auxiliary Territorial Forces (ATF) volunteer Dorothy Pilgrim chair the proceedings and it underlined the Governor General’s point that the young generations today and tomorrow need to know the real truths and lessons normally evaded by historians of old.

I watched the feature film produced for the occasion by Dale Eliott entitled ‘Guns, Guts and Glory – The Untold Story of World War I’ and I listened to him explain he’d made it “for my nine-year-old to understand and 90-year-olds to appreciate” and it confirmed what I’d said and written last week about telling yesteryear’s stories today and tomorrow through science and information technology. (I didn’t ask Dale why he still will “never speak German” but I’m sure the German envoy appreciated his effort to tell the story with all that footage.)

With the number of veterans dwindling by the year, the sprinkling who attended the WWI Centennial and Remembrance Day activity at Alliance Francaise were visibly pleased that their story will continue to be told with real images that recalled even their days far from the battlefields or far out at sea.

It would turn out that more Saint Lucians died in the First World War than the second, with more of the former buried at the Commonwealth War Graves Cemetery at Choc. But their stories need to be researched – from the many who died when their ships were bombed during World War I to those who the German sub bombed here during World War II. The likes of Dale can pursue their stories – and also the tales behind the US and Allied Naval Station at Rodney Bay and the American Base at Beanefield in Vieux Fort.

Not much is known by today’s generation about the circumstances under which British Prime Minister and war leader Sir Winston Churchill and US President Roosevelt negotiated the base here for a number of battleships – or, for that matter, that Churchill did visit Saint Lucia after the second world war.

All in all, Saint Lucians and other West Indians were so patriotic that they actually complained about being kept off the battlefield and denied the opportunity to defend their motherland. (My uncle Leo Bousquet in fact wrote a letter to the war Office in London registering the complaint of local subjects who wanted to defend the motherland.) The Barbadian fervour was so hot that (as the GG recalled) after Britain entered WWII they took to the streets chanting “Go ahead Britain, Barbados is behind you.”

My father didn’t attend Sunday mass – except for Palm Sunday and Remembrance Day. He’d participated in WWII as a seaman in the Merchant Marine and was lucky enough to survive. He was eventually awarded a British Empire Medal (MBE) and he always quipped it was due to “my bloody efforts” vis-à-vis those who received the Order of the British Empire (OBE) as a result of (in his words) “Other Buggers’ Efforts”.

Like my dad did with me, I take my granddaughter to see the Remembrance Day parade every year and try to explain “why all the fuss”. I well suspect that like Dale Eliott’s son she will argue about why she should spend her pocket money to “buy a poppy”. But I’m also sure that the likes of their generation will find the ways and means to put the likes of ‘Guns, Guts and Glory’ in 4D and make the apps that will set them into the next generation of educational smart phones, so that no future generation anywhere will ever forget what to remember not to ever forget!