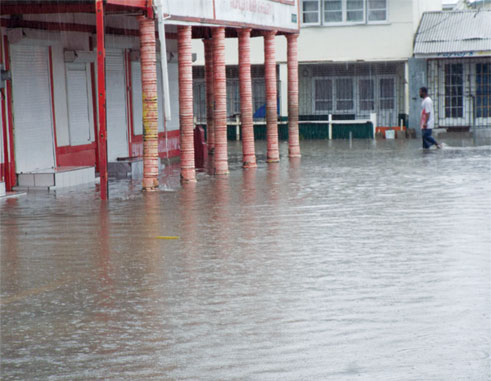 IN a world where absolutely every aspect of life is evolving at cheetah speed, it is amazing to see the few who have fallen through the net and continue to revel in stupidity.

Although it is common knowledge that no matter where you go in this world you will find silly people, there are some instances of stupidity that just slaps you in the face and leaves you wondering where, how and why are these people existing?

Whilst the nation held its breath on Saturday hoping and praying that the incessant rains would spare us and not repeat the events of Hurricane Tomas and the Christmas Eve Trough, some twits saw it fitting to show viewers of Choice TV how less than bothered they were about the impending woes.

Thanks to a special “live” broadcast of unfolding events from the said station, the nation was kept abreast of what was going on across the island. The news team braved the weather to show footage of areas under water and information from the likes of Press Secretary of the Prime Minister, Jadia Jn. Pierre-Emmanuel and the Meteorological Office was disseminated, leaving the masses with valuable information, whether it was for travel purposes or the wellbeing of loved ones.

The main aspect of the broadcast, in my opinion was the open lines for viewers to call in to the station to give updates on their areas and their status.

Whilst this gave so many people that peace of mind that was needed during such a nail biting time, there were callers who decided to use the serious platform to form the fool.

From the sound of the chipmunk voices and girly giggles, it was clear that the callers were children. However, they did sound old enough to know better. And even after News anchor-man Timothy Poleon, along with a number of irate callers asked the pranksters to cease the calls, they continued nevertheless.

I need to applaud Poleon for keeping his cool and handling the issue in a professional manner. I know a few people who would blow a gasket.

But honestly, why is it that some people simply refuse to practise restraint, maturity and respect?

Now this sort of behaviour is nothing new. These buffoons spoil the vibe of pretty much every talk show whether it be television or radio. While you have callers with insightful or valuable information to share, they are usually met with busy tones whilst the airwaves are being used and essentially wasted on pranksters with way too much phone credit and free time on their hands.

This behaviour is even worse on the news websites. Some of the comments left by these people will leave a nasty taste in your mouths.

This kind of behaviour really reflects on the kind of people who walk among us on a daily basis.

Surely the lack of respect radiates in these people’s general behaviour and the same way they behave impishly on the air, somewhere, somehow, they are someone’s nuisance.

I guess that’s the nature of the beast and this sort of thing comes with the territory, but come on!

I know that by sounding off on this topic, the price of coffee won’t change but I just needed to give my two cents and say how disappointing it is to see people still make to time to act in such a manner rather than contribute towards the betterment of the situation being discussed.

People, grow up and learn to act your age rather than your shoe size.