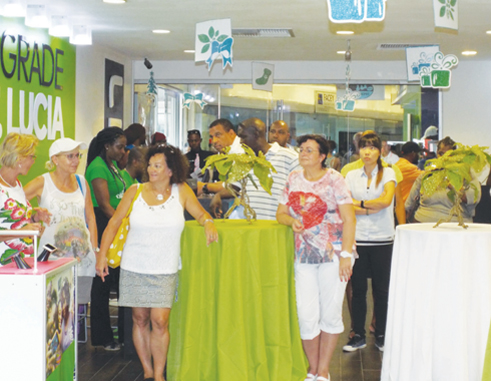 LIME St. Lucia is feeling the Christmas spirit and has embarked on a giving spree with Upgrade St. Lucia.

The $35 million investment was announced earlier this year and the telecommunications company has stuck with the theme which focuses on upgrades, and introduced Upgrade Christmas from Lime on Tuesday at the Blue Coral branch.

The public was treated to an enjoyable show hosted by fan favourite, Superman HD with features from Papa Jab, his wife and their boloms and a karaoke competition where six hopefuls sang to Mariah Carey’s “All I Want For Christmas” with hopes of winning a brand new iPhone 6.

The winner of that competition was Valentine Dantes who said that he was beyond happy to be one of the first iPhone 6 owners in St. Lucia.

Dantes said: “I’ve always wanted to win something. I’ve never won anything in my life. I’m one of those people who never wins anything because I guess I don’t really participate as I don’t think I will win but LIME made me a winner today”.

Marketing and Corporate Communications Manager from LIME,Sharlene Jn. Baptiste told The VOICE that this year the company will be stepping outside the norm and do things differently by focusing on value.

Jn. Baptiste said they are not only treating new customers but are rewarding existing customers by giving away data, value and talk. She said; “Customers for instance can get up to 100% of the value of their data in talk time so whatever the value of your data plan is, you get the same amount in talk time”.

This, she said, gives people the opportunities to connect in many ways.

Jn. Baptiste said this initiative is just the continuation of the company’s good works over the years. She said; “We’ve given so much time and investment and money back to communities. We were the first to start out our public feeding some years ago at the Derek Walcott Square where we worked with Feed the Poor ministries and we invited those who needed the help to come. We’ve done it in Dennery, we’ve done it in Soufriere, we’re doing it again this year plus, of course, we’re doing all the other traditional things that we know we need to do as a corporate citizen”.

The Christmas promotion will continue until January 31, 2015. Throughout this time, the company has promised an array of gifts and offers including the return of “Wacky Wednesdays” and deals on handsets like the “top up and get a free handset” deal held last week Friday.