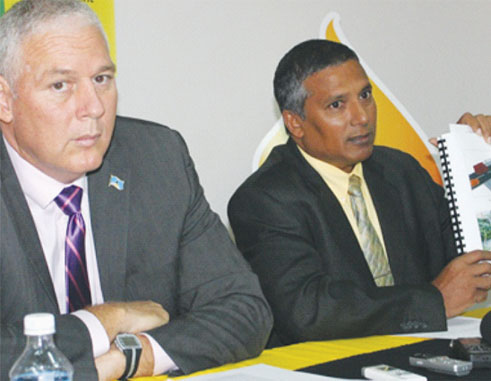 THE opposition United Workers Party (UWP) says it will not rest until the current government explains in full detail the circumstances surrounding the final costing of the Bois d’Orange Bridge currently under construction.

Former Minister for Communications and Works, Guy Joseph, says his successor, Phillip J. Pierre’s recent statement in Parliament “insinuating that the $11 million pricing on the bridge was the work of the United Workers Party” will not go unchallenged.

Speaking at a press conference held in the Leader of the Opposition’s Secretariat yesterday, Joseph referenced a design report on the said bridge which he said was published in December 2011 and commissioned by his party that demitted office a month prior. According to Joseph, page 3 of the design report spells out that the estimated cost of the proposed bridge was approximately $2.71 million and that the project would be funded by the World Bank as part of the Disaster Relief Fund.

“That, according to the study commissioned by the United Workers Party government, should have been the cost of the Bois d’Orange Bridge,” Joseph told reporters. “Now how did we arrive at a bridge costing $11 million and how can the Minister for Infrastructure come and make a claim in the Parliament of Saint Lucia that the United Workers Party government commissioned a study for the bridge and the bridge that we designed would cost the $11 million?”

Joseph said he remains baffled at Pierre’s alleged statement in the House, adding that he had unsubstantiated information that suggests that a subsequent study on the bridge’s cost was commissioned by the current administration.

Joseph is also questioning the government’s rationale for not giving two separate prices for the Deville and Mocha bridges but instead quoted a collective price for both bridges. In mid-August last year, Pierre announced the complete rehabilitation of the two bridges located in Soufriere, citing a $4.8 million price tag. According to Joseph, the actual cost of the Deville Bridge is estimated at $571,769.50 plus a 5% contingency fee amounting to $28,588.48.

“I’m raising these issues because there are millions of dollars in play there,” Joseph said. “How do we explain that the Bois d’Orange Bridge, which is a bridge for the highway, could be designed to cost less than $3.5 million? And I know that they’re going to tell you that it is a four-lane bridge. They have explained on several occasions that moving from a two-lane to a four-lane, the price should not double. So even if we were to make the decision to move from a two-lane bridge which was $3.2 million to a four-lane bridge which should not double but you still doubled it, it would still be about $7 million. How did we arrive at a bridge in Bois d’Orange costing us $11 million in these difficult economic times?”

UWP Political Leader, Allen Chastanet, said the government needs to explain why the final costing of the contentious Bois d’Orange Bridge ended up costing three times its original estimated cost. He is also seeking the government’s clarification as to how many reports were presented to the World Bank for approval.

“What we don’t know is whether the government did submit two designs or three designs to the World Bank and the World Bank chose the design or did the government only submit one design,” Chastanet said. “And that is the question you’re going to have to clarify. We cannot answer that question because we were not in government at the time it was submitted to the World Bank. But I think the point that’s being made is that what was being presented as fact was that the United Workers Party was the one that did the design for the $11.3 million. That now is being refuted.”

During an interview with The VOICE last Friday morning, Pierre said the Bois d’Orange Bridge will be completed by early next month for the latest. He said the bridge will be one of the most modern bridges in the Caribbean, due in part to its girders being made from weathered steel. He indicated that the bridge’s resilience to the effects of climate change would serve well for the investment made in it. Pierre also told The VOICE that despite the delay in the bridge’s completion, no cost-overruns were incurred.