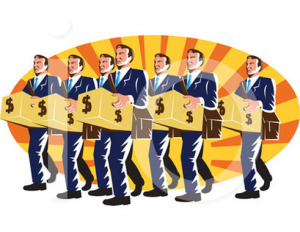 A state of high anxiety exists in the local banking sector as employees worry over whether they will be sent home.

The VOICE understands that employees at Bank of Saint Lucia and Scotiabank are anxious about thier fate.

This state of impending job cuts prompted employees of Bank of Saint Lucia to call on management last week to address this issue.

Efforts to get a comment from the bank were unsuccessful. After several telephone calls to the bank we were told that the persons who could speak to that issue were all at a meeting which was expected to last well after press time yesterday.

There is no word yet whether employees at Scotiabank will be impacted following announcements last week that its head office in Canada will close or down-size about 120 branches in Mexico and the Caribbean, in a bid to save CAN$120 million annually.

Scotiabank Canada said it would close down 35 of its 200 branches in the Caribbean and would sever 1, 500 full-time employees, including 500 from its international operations.

It is still unclear which of the islands will be impacted; however the bank in a statement noted that it was over-branched in some Caribbean countries and that it has to size itself to the economic realities of these economies, adding that while its revenue growth has been encouraging outside Canada, its profit had not jumped as much it would like.

The bank blamed the prolonged economic recovery and continued uncertain outlook in the Caribbean as the reason for its action in the Caribbean noting that it had started restructuring in order to improve the speed and quality of service it provides its customers, to reduce costs in a sustainable manner, and to achieve greater operational efficiencies.

According to the bank’s statement the move to close or downsize its operations in the Caribbean and Mexico will allow it to focus on high-growth markets, minimize branch overlap, and realize synergies resulting from recent acquisitions.

Scotiabank made a record CAN$6.7-billion net income in 2013.

The bank said the planned job cuts will affect employees at all levels of the organization and include an unspecified number of reductions at its head office in Toronto.

“Combined, the branch optimization, head-office reductions and leadership changes will result in a decline of approximately 1,500 full-time equivalent positions. About two-thirds of the reductions will be in Canada and one-third in international locations,” the bank said in a statement.