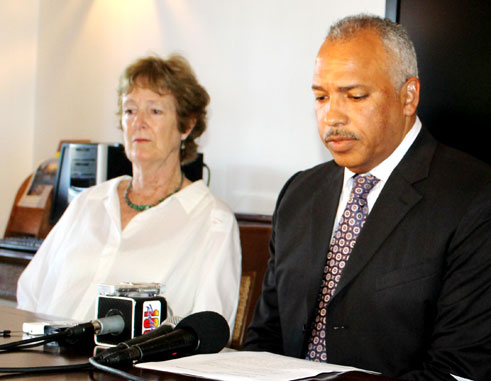 A $250,000 reward is being offered to anyone having information that leads to the conviction of the person/s involved in the murder of athlete and businessman, Oliver “Ollie” Gobat, whose charred remains were reportedly found in a burnt-out SUV at Cap Estate on April 25.

Gobat’s parents, Theo and Helen, held a press conference yesterday at their Cap Maison Resort and Spa property where their attorney, Peter Foster, disclosed the general details of the reward. In the 5-minute-long statement he read on behalf of the Gobat family, Foster said the $250,000 “Justice For Ollie” fund was created by family and friends “to assist the police with the investigation of Ollie’s murder, including the use of investigative processes never-before-used in Saint Lucia which, if successful, may well lead to the permanent use of such facilities on the island.”

Foster added that anyone having information pertinent to the case can call the campaign’s hotline number at (758) 720 5543 or send an email to justiceforollie@hot mail.com. The Gobat family’s attorney said the phone number and email address are “independent of the police but endorsed by them” and that all information received will be dealt with in the strictest confidence.

“Anyone providing this information and who may have been associated with those responsible and who may have played a minor role may be granted immunity by the prosecution,” Foster read from the statement.

Gobat, 38, who was born in Saint Lucia where his parents have lived since leaving the United Kingdom just over four decades ago, was a star squash player and had represented Saint Lucia on a few occasions.

Since his death, local police seem to have been stumped in their efforts at tracking down Gobat’s killer/s. Reports indicate that the charred remains of Gobat were found in the passenger side of the vehicle in which there were no keys. The doors of the vehicle were also said to be locked.

Yesterday, Theo Gobat described his son as a man who overcame the odds to do great things. His son, he said, was diagnosed with cancer at age 13 but nonetheless went on to become a successful athlete and entrepreneur. Gobat said that after leaving Saint Lucia for some time and returning here eleven years ago to settle down, his son was able to contribute immensely to the local tourism landscape. He said he will not rest until he finds justice for the son of whom he was proud.

“Obviously, I’m very proud of him and dearly loved him,” Theo Gobat said yesterday. “A wonderful son, a wonderful brother, (and) a wonderful man. I personally will never have peace until his killers are found.”

Gobat said his family remains worried that his son’s death will go in vain, referencing the recent upsurge in crime on the island. He added that while he understands people might be fearful of coming forward with information, taking a stand against crime trumps doing nothing. Finding his son’s killers, he said, “would be the start of putting Saint Lucia back on a more lawful footing.”

“So I would say to people out there, ‘Please, please help us find Ollie’s killers. Help us make a stand and give us whatever information you have got,’ ” Theo Gobat said.

Helen Gobat said her son’s death remains fresh in her mind. Just this week, she said, she returned to Saint Lucia to spread her son’s ashes near the bay at Smuggler’s Cove where he often swam. Like her husband, she, too, expressed the need for justice to intervene in her son’s death.

“For me, it’s a prime life cut short and I can’t bear to think about never working out the hows and whys and wheres because that would blight (me) and the family for the rest of our lives,” an emotional Helen Gobat said yesterday. “We don’t have as long to live as our sons, Ollie’s brothers (Adam and Rufus), who are in their 40s, and his nieces and nephews.”

Theo and Helen Gobat expressed their gratitude to Saint Lucia and Saint Lucians for being part of their lives for over four decades. Nevertheless, Helen Gobat said, “the ghastly seven months” since her son’s death had left their lives “in a sort of limbo” which would not go away unless the family gets some measure of closure in their loved one’s death. She added that the family “would like to see things happen much faster”.

Helen Gobat said the crime scene was not cordoned off and the body and car were moved on the night of the incident, amounting to “initial basic mistakes” by police. Nevertheless, both she and her husband said that while the local police are limited in what they can do in solving crimes, “they are doing their best”.

When asked whether they feared for their lives, Helen and Theo Gobat said they were. Nevertheless, they say they will not end their quest to find their son’s killer/s.

“Any leads that are gained from this initiative, I am confident the police will take it and run with it,” Foster said.