The St. Lucia Chamber of Commerce, Industry and Agriculture hosted another successful Annual General Meeting on November 30th, 2021. The Annual General Meeting is the highest decision-making to account for the stewardship over body of the Institution. The AGM allows the President, Board of Director, Committees, Executive Director and Secretariat to account for their stewardship over the previous year and gives the general membership the opportunity to hold them accountable and ask questions.

Long serving Board Member and Managing Director of the St. Lucia Electricity Services, Trevor Louisy, finally agreed to take the helm of the Chamber on whose Board he served since 2010. Mr. Louisy brings years of understanding of the operations and policies of the Chamber to his tenure, along with a profound appreciation of the advocacy approach, issues, and longstanding goals and objectives of the Chamber.

The Annual General Meeting had as the Featured Speaker, Honourable Philip Joseph Pierre, Prime Minister of Saint Lucia who had his first opportunity to speak directly to the Membership of the Chamber since becoming Prime Minister in July 2021. The Prime Minister in his pre-recorded Address challenged the Chamber to partner with the Government in building a new St. Lucia Economy and society, highlighting the need for support of young entrepreneurs and the youth economy, as well as taking advantage of blue green and orange economy.

Principal Consultant of RES Consulting Mr. Francis Lewis was the Guest Speaker at the Chamber AGM. In-keeping with the theme of the event “Adapt, Operate, Thrive” Mr. Lewis’s spoke to “RESET. RETHINK. REBOOT”. He suggested a possible approach to dealing with issues of business survival. Firstly, stabilizing operations and creating time to prepare for recovery, then rethinking how the Business should operate in the future of uncertainty (rethink) and then finding the model and finances to “reboot” the business. Rebooting he proposed requires the application of high impact tools to pivot, transformation & growth.

The Chamber President, Ms. Karen Peter, who served a three-year term, after being called upon last year to guide the Chamber through a tumultuous period of Covid-19 pandemic and a heated election year, advised from the onset that she would not be available to serve as President for another term, delivered her final address to the AGM as President. She reminded the members of the work successfully undertaken by the Chamber on their behalf, highlighting member focused advocacy and representation during the pandemic. She specifically lauded the development and commencement of the Smaller Member Support Program and the design and launch at the AGM of the Member Value Program, both aimed at increasing membership value. She also highlighted ongoing issues that needed to be addressed including Trade Facilitation; Global Cost and Price Escalation; Building National Social and Economic Resilience, Climate Change, and the crime situation.

Ms. Gilbertha Stoddard, Assistant Branch Manager-Sales & Business Development, represented event partner Beacon Insurance. Her presentation focused on two services currently on offer to the Business Community. The first being Rest Easy – designed for families and the second, Be Better – an accessible and affordable Group Plan designed with small to medium businesses in mind, to make Health and Life insurance coverage for employers and employees. Both presentations were well received by participants who are constantly reviewing opportunities to enhance their offerings to their team.

A resounding show of high interest of Chamber Members in serving and participating in the affairs and life of the Chamber was demonstrated by the turnout of members at the AGM as well as the number of people who offered themselves to serve on the Board during the Election of Officers. It was also noted that many members had also served on the various Committees of the Chamber during the last year.

The 2021/2022 Board of Directors of the St. Lucia Chamber of Commerce Industry and Agriculture are: 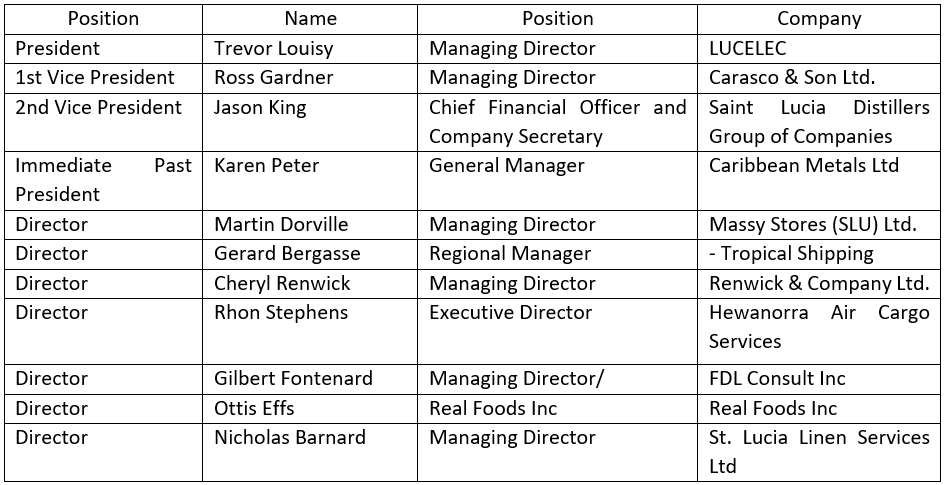