THE Embassy of Saint Lucia in Taiwan was the first to be able to commemorate Saint Lucia’s 42nd Anniversary of Independence. Just before noon on the 22nd February 2021 it held a flag-raising ceremony at the Diplomatic Compound.

Because Taiwan is 12 hours ahead, the timing was symbolic since noon coincided with the midnight moment at which Saint Lucia became an independent nation. 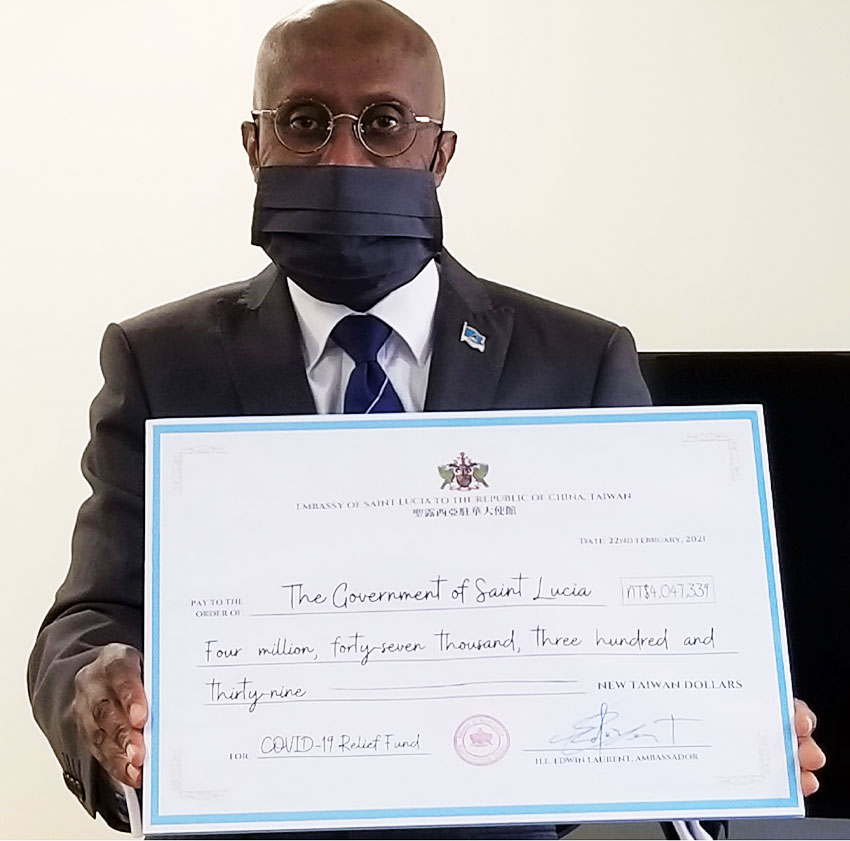 Attending were the Vice Minister and other representatives of Taiwan’s Ministry of Foreign Affairs, the Diplomatic Corps, business contacts, the press, our nationals and other guests.

Prior to the ceremony, Ambassador Edwin Laurent met with the Ministry’s representatives, and the Chairman of the St. Lucia Friendship Alliance to announce the total proceeds from the Embassy’s initiative for securing assistance from the general public in Taiwan to aid Saint Lucia’s COVID-19 relief and recovery efforts. The Embassy was able to obtain donations of surgical masks, test kits, disposable coveralls, hand gloves, N95 masks, PPE and other items. In addition, a total of NT$4,047,339 (approximately EC$391,700) was raised for the COVID-19 Relief Fund which will be sent to Saint Lucia.

The Ambassador pointed out that the donations demonstrated that it was not just Taiwan’s Government that is willing to help Saint Lucia, but also the private sector and the wider community.

At the flag-raising ceremony that followed, Ambassador Laurent welcomed attendees and, in his remarks, underscored the significance of the attainment of Independence.

He said that “Now for the first time, we were free to make our own choices, to befriend whoever we wished and to work with other countries to help bring about a better world that is in line with our core values.”

He told participants that until COVID, Saint Lucia had been “making good economic progress.” But the pandemic had a disastrous impact on tourism-dependent Saint Lucia.

The Ambassador expressed appreciation for the international support that Saint Lucia received as it struggled to cope and he looked forward to the future when the island “will begin to emerge from this painful time and be able to build back after the devastation wrought both directly and indirectly by the global pandemic.”

Precisely at 12 noon, the flag was raised by two Saint Lucian students, Wendell Bertrande, and Nykole Edward, whilst the national anthem was sung by Keril Victor, who sings professionally in Taiwan and Cleisha-Bernise Springer of the Embassy.

Independence anniversary celebrations actually began two days before on Saturday afternoon with the Embassy hosting a social event with nationals. There was lunch, games, karaoke as well as a raffle. The first prize was a night for two at a top hotel in Taiwan, which was won by Allan Simon, a student.