When Ericka Brown was a little girl, she dreamt of being like her mother. Her mother was a herbalist and she watched in awe as she changed the lives of others. Brown grew up in the beautiful island of Barbados and as soon as she was old enough, she started helping her mother.

She was a “mummy’s girl” and she was proud it. According to her, they were a “tag team.”

“It started with my grandmother. She was a midwife and she used to prepare local medications and my mum learned how to make them and passed it on to me. As a child, I would get excited whenever she made her remedies, because she was healing people. I used to assist her with everything. I went to the woods to look for some of the things she needed, I grated and pounded the ingredients and I did so much more,” she explained.

She was the perfect helper and with time, she got better. Brown learned as much as she could and by the time she hit her pre-teens, she was already a healer.

“I wanted to help people. I used to go to people’s homes to rub them and make tea for them when they were sick. I was around twelve years old at the time,” Brown said.

Although she was very young, persons trusted her to do a good job. As she got older, her love for medicine grew. She returned to Saint Lucia after spending 21 years overseas and started a new journey. 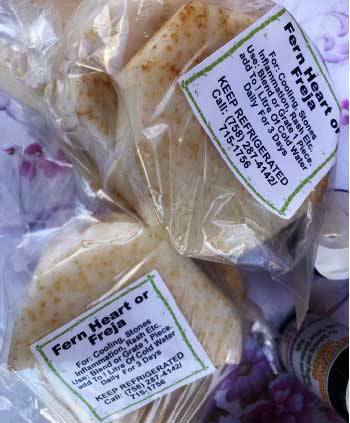 “My mom and I started a business called ‘The Herbs Ladies’ and when we started it was very tough. We used to walk everywhere and anywhere with two baskets trying to convince people to trust us. People even used to say that we were crazy. It was very difficult but that comes with the work, it’s like humility before honour,” the herbalist said.

“After selling on the streets for a while we went to sell by Elwin’s Supermarket. We moved around and then we came by Domino’s Pizza in the William Peter Boulevard and it’s been about eight to seven years since we came here. My mom passed away last year, however, so I’m continuing her work. Her mission was to help people in whatever way she could,” she added.

Brown has a genuine love for people. For her, it’s not simply about making money but making the lives of persons better. That is certainly obvious. I watched her interact with her customers and love oozed out of her.

“What I like most about it is hearing people’s testimonies. Hundreds of people have been healed; I actually pray and ask God to heal my customers,” Brown revealed.

According to her, she is “nothing without them.”

Brown makes her medicines with love. She has a garden with numerous herbs and for her, it’s like a little slice of paradise.

“I feel so nice and relaxed when I’m there,” she said dreamily.

“Making the medicine takes a lot of time, however, but my husband assists me. It took a whole day just to make the things I need for today because everything is freshly picked and freshly prepared. I use wood fire to prepare them and alkaline water. If I don’t have all the ingredients for a medicine, I don’t make it because everything you do must be pure and true. There are days when I wake up very early to prepare,” Brown explained.

“My products don’t carry preservatives or chemicals that’s why I ask customers to refrigerate them because they are pure. This is how my grandmother and mother made them. I have remedies for all kinds of problems including chronic obstructive pulmonary disease (COPD), inflammation, blood clots, fibroids, cysts, asthma, everything you can think of,” she added.

She wants to keep her family’s traditions alive and she is even willing to share her knowledge with strangers but according to her, they have to be serious. 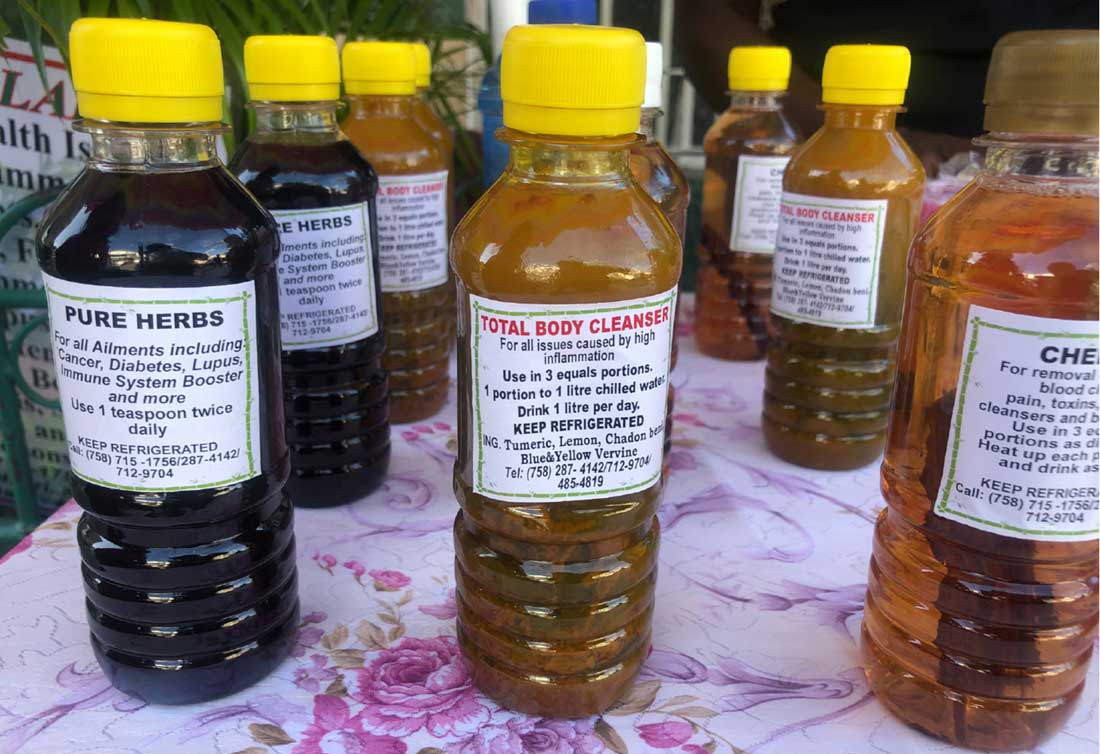 “I don’t want persons who are in it just for the money because there are days when people come here without any money and I still give them medication. These are people who really need it and really can’t afford it. It would hurt me to go home with my medicine when I know that. You need the money, but more importantly, it’s about coming to help people. It’s about healing the nation,” the 45-year-old explained.

And according to her, one is never too old to learn.

“I take a lot of advice; I don’t care who it is. Once it makes sense, I grab onto it because I also come here to learn and my customers have taught me a lot. Every day we are here to learn, learning never stops,” she said in closing.

You can find her in the William Peter Boulevard on Mondays, Wednesdays and Fridays. I’m sure she’ll greet you with a smile.