A National Day event in Taiwan netted EC$68,000 for Saint Lucia which will go towards addressing the damaging effects of COVID-19 on island. 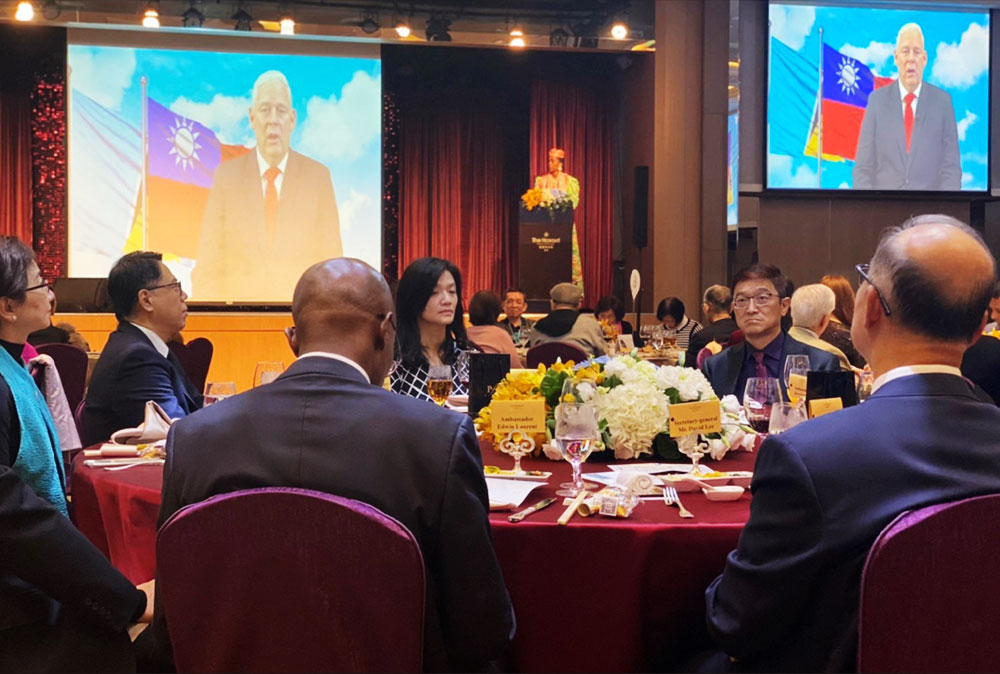 Prime Minister Allen Chastenet, made a guest appearance at the dinner via video link. The aim was to promote Saint Lucia and raise funds from Taiwan’s business community to help Saint Lucia in its fight against COVID-19.

According to a press release from the Taiwanese Embassy here, the Alliance wanted to show Saint Lucia, which has been such a strong ally and supporter of Taiwan at the international level, that at this time, when it needs help, it can count on the business community and the public in Taiwan.

The Alliance is made up of leaders from business, tourism, journalism and education, and works to strengthen friendship, business and cooperation between Saint Lucia and Taiwan. It is the legacy project devised last year by the Embassy to commemorate Saint Lucia’s 40th Independence Anniversary.

The 150 attendees at the dinner, mainly leaders in business and tourism, were joined by high-ranking officials from the Government including H.E. David Lee, Secretary General of the President’s Office and H.E. Miguel Tsao, Vice Minister of Foreign Affairs.

Chastanet, in an address, commended the warmth, kindness and hospitality shown by Taiwan and recalled “standing with President Tsai at the Taiwan National Day parade, with our flags lining the streets side by side, flowing in unity.” Taiwan, he said, holds “a special place in the heart of all Saint Lucians”. He applauded Taiwan’s success and gave the assurance of continuing support for its greater participation in international organizations. He felt that the world would be better when Taiwan can “freely share skills, technology and expertise”.

Addressing the business leaders directly, he said that the very presence of the Embassy in Taiwan underscores the government’s “policy of broadening engagements, especially as it relates to investment, trade and travel.

“It is our desire to ignite a greater awareness of Saint Lucia as a brand, as a tourist destination and viable trading partner,” Chastanet said.

Ambassador Laurent, in his remarks to the business leaders, explained how COVID had caused the loss of jobs, income and government revenue. The overall impact was to derail the steady economic progress that the island had been making. He stressed though that Saint Lucia remains an attractive destination for tourists and for foreign direct investment.

He noted that “despite the current global economic crisis, when so many businesses are hurting, Taiwan’s private sector is still willing to reach out a hand to help the less fortunate who are struggling desperately to survive”. He commended such generosity as a tangible demonstration of the support of the Taiwanese people.

He assured the leaders that their support is greatly appreciated by Saint Lucia and enhances the image and perception of the value of the friendship between our two countries.

On the evening’s programme was the premiere showing of a specially commissioned promotional video on Saint Lucia. The entertainment included an appearance via video link of Boo Hinkson and members of his company, playing a medley of tunes.

The highlight though was the “crowd pleasing’ performances in Chinese and in English by Saint Lucian singers Keril Victor and Allan Rankings Simon as well as young Taiwanese musicians.

Three paintings from Saint Lucia were auctioned as well as a specially commissioned watercolour of a Soufriere seascape by a Taiwanese painter.

The evening’s event netted approximately EC$68,000, which will be added to the relief fund that the Embassy is raising to remit next month to St Lucia.

The real long-term benefit of the Gala though is expected to come from the promotion and favourable exposure of Saint Lucia to the business and tourism leaders in Taiwan.