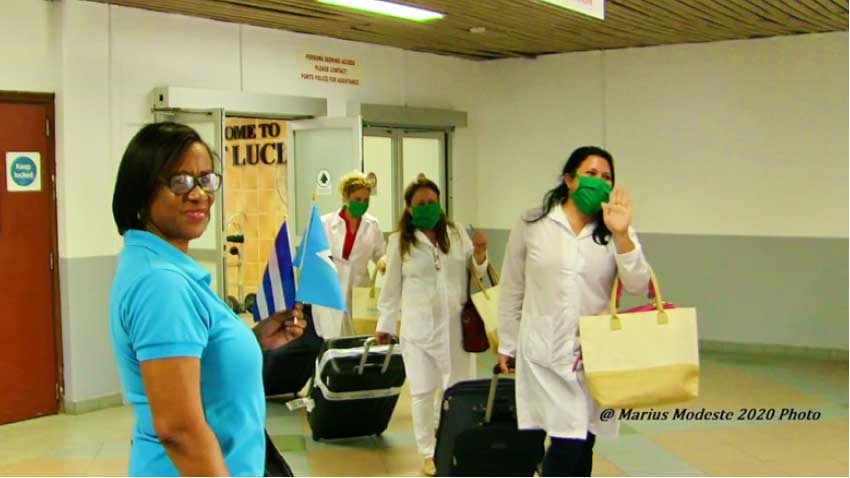 CUBA is leaving no stone unturned to demonstrate its commitment to its Caribbean neighbors and the entire world in the global fight against COVID-19.

Just like it has never hesitated to send combatants whenever and wherever requested to help defend independence and sovereignty of newly-liberated nations in Africa, so it is also now again reaffirming its commitment to its Caribbean neighbors by dispatching brigades of medical combatants in 2020, to help countries as far apart as China, Italy and Saint Lucia to battle the latest Corona Virus.

After successfully developing a working cocktail that’s proven helpful in China and at home, the Cubans offered to share it with the world and within one week some 45 countries had lined-up, including several from the Caribbean Community (CARICOM).

They might not all have been leaders at the time, but the current crop will have remembered or known that in 1976, it was four CARICOM nations (Barbados, Guyana, Jamaica and Trinidad & Tobago) that broke the Hemispheric diplomatic blockade against Cuba, opening the way for scores of others that followed the precedent already then established.

They will also have remembered the tens of thousands of citizens from all member-states who in the earlier part of this 21st century benefitted from the totally free ‘Operation Milagro’ eyecare programme led by Cuba.

The world exploded in deserving applause and admiration when Cuban doctors and nurses landed in Italy to help fight the virus in Europe’s most-affected country, where people have been dying at an average rate of 800 per day.

On Sunday (March 29) Cuba’s Foreign Affairs Minister Bruno Rodriguez disclosed Cuba had sent 800 doctors, nurses and medical technicians to 12 countries, the vast majority of which are its CARICOM neighbours.

The Saint Lucia delegation of 113 Cubans arrived Thursday and were welcomed by the island’s Health and Foreign Affairs Ministers and Chief Medical Officer (CMO), the Cuban Ambassador to Saint Lucia and the President of the Saint Lucia-Cuba Humanistic Solidarity Association (HSA).

Cuban Ambassador Alejandro Simancas Marin was also on hand when they checked-in at Sandals Regency La Toc in Castries.

Sandals Saint Lucia Managing Director Winston Anderson and General Manager of Sandals Regency La Toc Gaurav Sindhi welcomed the doctors, bio-engineers and nurses at the first Sandals property on the island, which, like all other Sandals Resorts throughout the Caribbean, is temporarily shut to visitors due to the Corona virus.

Anderson said the company had ‘no hesitation’ in donating the accommodation for the Cuban medical team here to support Saint Lucia’s ongoing efforts to strengthen its health system amid the COVID-19 pandemic.

‘We must all pull together, as one country and one region, to assist in whatever way we can in the fight against this very serious virus.

‘Sandals is therefore happy to be in a position to help by donating 150 rooms to be used by the Cuban medical delegation and supporting local personnel, as they in turn provide vital support to Saint Lucia.”

Ambassador Marin thanked SRI for their assistance, which he said ‘will go a long way’ in helping the medical team as they go about their duties here, which include assisting in the setting-up of quarantine and respiratory hospital facilities.

Chairman of Sandals Resorts Gordon ‘Butch’ Stewart also had his say about his company helping out in Saint Lucia, Jamaica and all the other islands where its resorts are located.

The owner of the largest hotel chain on the island and in the Caribbean — and which employs the most industry workers here — noted too on Sunday;

‘Sandals has been an integral part of Saint Lucia since 1992’ (28 years ago when it bought the property) and ‘Our hearts go out to the people of Saint Lucia, in particular those that have lost their jobs in these very difficult times, as well as those people who are experiencing hardships.’

He continued: ‘It is and has always been our pleasure to support and work alongside the beautiful people of Saint Lucia — and we will continue to do so.’

Sandals has also made its Carlisle Inn, a 52-room hotel in Montego Bay, Jamaica, available for use as an incubation center for patients recovering from COVID-19.

He said, “This is a crisis like we have never seen before. Our position is that we are all in this together as tourism stakeholders — and as citizens of Saint Lucia, Jamaica and the world at large.”

Meanwhile, Prime Minister Allen Chastanet on Sunday afternoon heaped overwhelming thanks and praise on Cuban doctors, bio-engineers and nurses for their internationalist support for his country and people.