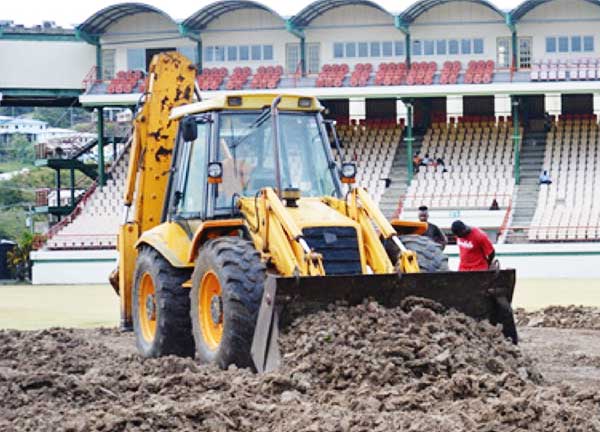 WITH 139 days to go, Saint Lucia is leaving no stone unturned in preparation for the inaugural test match between host West Indies and South Africa at the Daren Sammy Cricket Ground (DSCG) scheduled to bowl off on Friday 31st July 2020.

There was something unusual taking place on the square (pitch) during Day 1 (Tuesday 10th March) of the Inter Secondary Schools Northern Zone track and field qualifier.

The VOICE caught up with the curator, Ken Crafton, during the excavation works that was taking place.

This is what he had to say.

“The operation/ excavation works taking place at present is the relaying of the square (pitch) where it’s a normal maintenance operation which should be conducted every 8 – 10 years; we strip off the upper three and a half to four inches of top soil and will be replacing it with fresh clean sifted dry soil”.

“The reason for this operation, after those years, would be a buildup of organic material, dead roots in the soil profile and this would prevent the bowler from getting the amount of pace and bounce you could get out of the pitch, so we are in the process of relaying and that will give us a pure surface back to the square”.

In terms of duration of process/works. Crafton said, “The works should take about one week, and the growing period is 6 – 8 weeks for the grass to fully grow, and to fully settle in total 10 weeks”.

The time frame: “We are way in advance: the Test match between West Indies and South Africa starts on Friday 31 July this gives us enough time to get the square well prepared”.

The wicket at Daren Sammy Cricket Ground (DSCG) is known for its share pace and bounce, what can one expect this time around?

Crafton: “That’s the main reason for undertaking such operation to be on top of things, not doing it would definitely lessen on our pace and bounce”.

In terms of the type of soil, “It’s a clay base soil; it has been tested during the time when we were selecting soil for Cricket World Cup. This soil has a clay content of 78 percent”.

The cost of the project, he said, “To get the soil processed, to get it dry, to get it clean, to sift it, because we have to go through those procedures before we use it on the pitch, will cost an average of about $12,000.00 – $15,000.00. including the equipment (Barco) to get the excavation work done”.

Crafton is the leading curator/ a grounds man within the Organization of Eastern Caribbean States (OECS), he has conducted similar works in other countries in the region.

He has received training from outside of the region at an ICC workshop, on pitch preparation and maintenance in Dubai in 2012.