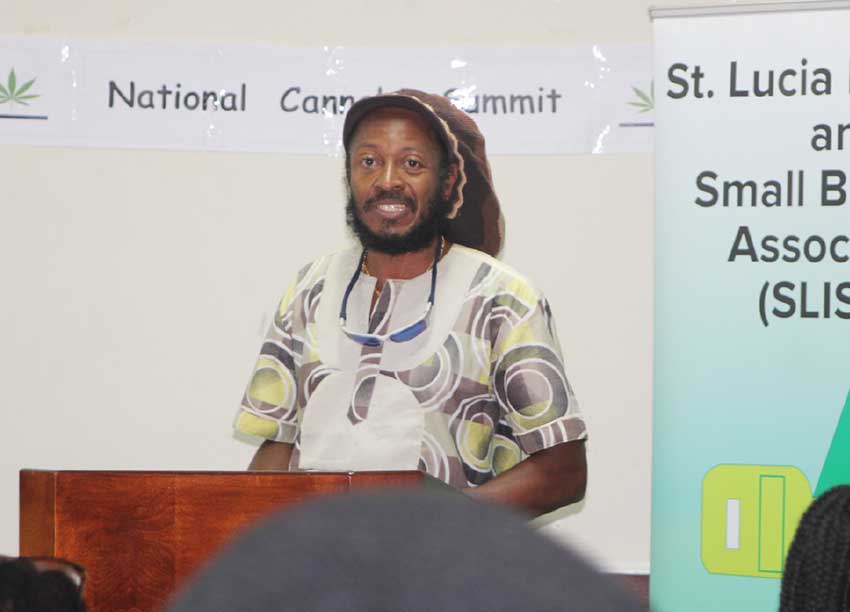 INSIGHTS on the way forward should government reject the report of the Cannabis Commission were enthusiastically discussed at a National Cannabis Summit hosted by the Saint Lucia Industrial and Small Business Association (SLISBA) last Sunday at the Leisure Inn, Soufriere.

Supported by the Iyanola Council for the Advancement of Rasta Fari (ICAR) Inc., Saint Lucia Cannabis Movement and the Herbal Cooperative, along with key players in the movement to reverse decades of legislation that imprisoned people for possession of cannabis, the summit was hailed a resounding success not just by the organizers but also by participants who comprised small business persons, farmers and entrepreneurs interested in investing in the crop.

The day-long event saw presentations about the progress that had been made towards legislative reforms, opportunities in the cannabis industry and efforts to ensure that the industry stays in the control of locals.

Addresses were received from representatives of ICAR, youth, advocates and members of the existing Commission, who provided very effective insight into the amount of work that had been undertaken to educate citizens and the feedback received all to ensure that the process for legal reform is undertaken in a participatory manner.

Members of SLISBA who were present supported the focus on local ownership of the proposed legal reform, with the Rastafarian community being pivotal in this new construct, because of the many years and decades they (as well as Andre De Caires) have been advocating for legal reform to address the stigma and criminality which has characterized use of cannabis, as well as to unleash the outstanding potential of cannabis to contribute to the economic development of the country.

The Summit provided an opportunity for the Rastafarian community and members of small businesses, especially small and medium farmers, to learn firsthand about the work the Rastafarian community has been doing and how best all groups and individuals can work together to ensure that partnerships and continued collaboration and investment by locals remain a central focus of a reformed agenda for the Cannabis industry.

Business owners and farmers who are members of SLISBA and who have large portions of land at their disposal agreed to work with the proposed structure which will empower locals to make maximum use of the potential which a reformed cannabis industry will present.

Representatives of ICAR thanked SLISBA for this timely initiative and expressed appreciation for the opportunity to meet with entrepreneurs, especially farmers in key areas around Saint Lucia, who seem quite keen to get on board with the Cannabis Cooperative. In fact, at the end of the Summit, some members wasted no time in signing up to become a part of the Cooperation, paying the initial application fee right there and then.

Melita Ashford, SLISBA’s Public Relations Officer noted the collaborative strategies discussed at the summit to address the various scenarios which may come out of the proposed process of reform.

“It was truly inspiring to see business people committing right there and then to work together and to provide economic support as a sign of their commitment to moving forward collaboratively with legislative reform and the business opportunities which will expand the scope of existing farmers as well as other entrepreneurs who are interested in investing,” she explained.

“One point which was also emphasized, is the importance of the Cooperative as a central purchasing agency, which will ensure the protection of small farmers, which is the major focus of SLISBA, which now includes a strong membership base of small and medium farmers,” stated the organization’s president, Flavia Cherry.

The one-day Summit ended with a networking reception which appropriately allowed participants to mingle and get to know each other better.