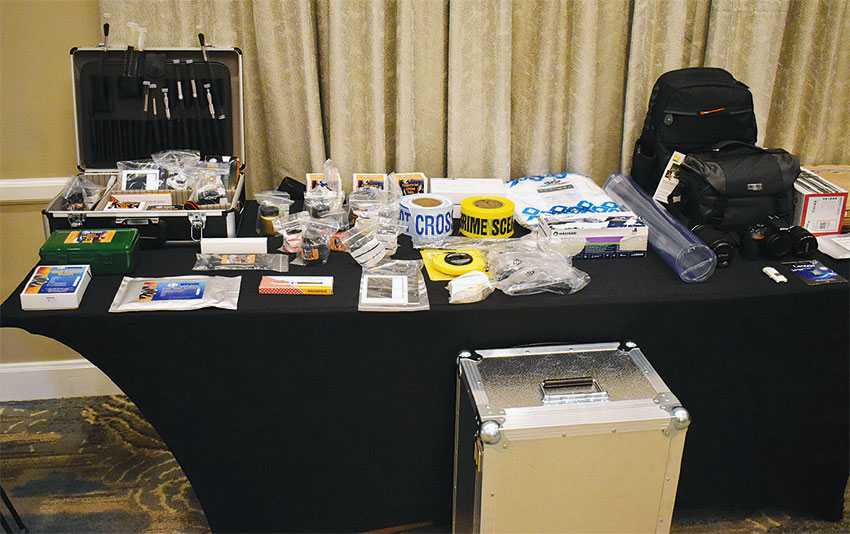 There to present the equipment was Graham Archer, Deputy Executive Director of the RSS. He said the equipment, which partly comprised of evidence recovery and preservation systems, were valued at approximately EC $67,000. He said that other RSS member states had received the same equipment, through the support of the 10th European Development Fund (EDF) Project.

Ann Joseph, Press Relations Officer of the RSLPF and Master of Ceremony, said that the RSS was seeking to strengthen the competencies of law enforcement agencies, particularly with respect to developing holistic approaches to dealing with illicit drug trafficking and drug offenders.

Joseph continued, “With the contribution of this equipment to the Scenes of Crime Office, the RSLPF will definitely be placed in a better position to improve its crime scene handling collection practices and overall increase in detection of crimes. This initiative we hope is a precursor for many of a similar nature in the future.”

Milton Desire, Acting Commissioner of Police, in his address said that crimes were becoming more sophisticated than before and that prosecuting offenders had also become more technical.

On that note, Desire stated, “The equipment which we are receiving will undoubtedly assist the RSLPF in its crime fighting initiatives. The RSLPF is in dire need of this crime scene equipment and comes at an opportune time”

He reiterated, “This equipment will not be taken for granted and will undoubtedly assist investigators and Scenes of Crime Officers, which range from vehicular accidents to homicides during the investigations. This equipment will be utilised immediately and we are looking forward to more of this superb initiative in the near future.”

Hermangild Frances, Minister for Home Affairs, Justice and National security, was also present at the ceremony. He conveyed his personal thanks to the Deputy Executive Director of the RSS and the RSS Delegation, stating that the donation of crime scene investigation supplies was well-timed. He affirmed that the presentation of supplies was a very tangible and visible gesture which demonstrated the quality of cooperation among RSS members in their commitment to serve and protect the sub-region.

In regards to the importance of the equipment donated, Frances remarked, “Having the right equipment lowers the risk of compromising physical traces of evidence due to the readily available material and equipment. These kits facilitate the complete and systematic processing of any crime scene. We need to secure justice for our victims. Crime fighting is about preserving the rights of all the victims both before and after the crime, even when they are not there in person. The state has a duty to do all it can to ensure that the body of evidence speaks to us and points to the perpetrator from even beyond the grave.”

The minister further emphasized that lack of proper crime scene investigation equipment could lead to a compromised crime scene and contamination of evidence, which also lead to the gross miscarriage of justice and “an unhappy public”.

Acting Deputy Commissioner of Police, Crucita Pelius, said that the RSS had not only provided crime scene investigations equipment, but also demonstrated its commitment in ensuring training for the enhancement of policing skills in Saint Lucia. The training according to Pelius, included ‘crime scene first responder’, ‘crime scene technician training’, ‘border security training’ and ‘drug prosecution’ among other types of training.

Pelius intimated to the RSS, “You have ensured international standards and best practices in crime-fighting, and you have created the opportunity to leverage information technology to support standard investigation methods.” She added that these contributions by the RSS will enable successful prosecution of perpetrators.

In closing, Pelius remarked, “It is because of our hard work, dedication and commitment to this organisation that we have been blessed with this package today. We express our appreciation as it is through our collaborative efforts that we are able to bring this organisation and the country forward. Let me assure you once again, that this equipment will be put into good use for the purpose intended.”