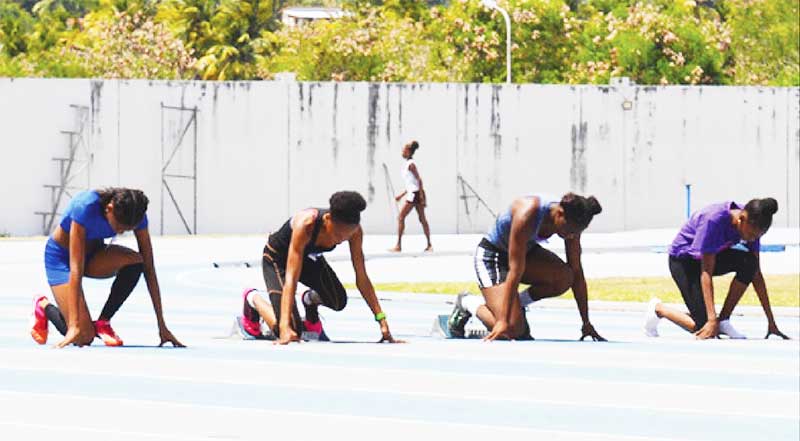 THE sport of track and field has received a boost in its officiating arm when Drmia Brown, a Correctional Officer at the Bordelais Correctional Facility created history. Brown became the first female starter to officiate at the annual Inter Secondary Schools Sports Championship (Northern Qualifier) held at the Daren Sammy Cricket Ground (DSCG) on Tuesday 10th March 2020.

Brown now joins an elite group of male starters who serve the sport of track and field for many years in that position. Nathaniel Samuel, Dudley Simmons, Winston Bastian, George Rock and Hugh Bristurral (Deceased), Mollison Walcott, Francis Francois, Victor Dudley, Ovantan Lambert, Samson Lambert and Husain Griffith. It must also be noted that these men used 303 rifles throughout their career.

During the lunchtime break on Day 1 (Tuesday 10th), the VOICE spoke to Drmia Brown about her involvement and what persuaded her to take up the challenge in a male dominated area in track and field.

This is what she had to say.

“I always had a passion and love for youth work, for engaging with young people and helping them to develop themselves. A former member of O’Black Fusion Club in Jackmel; I am also the leader of my Church Youth Group, Holy Family Parish in Jackmel”.

On the field, Drmai started technical officiating four years ago when she was introduced to the BILD programme in collaboration with the Ministry for Youth Development and Sports.

She said, “A number of individuals were trained by local tutors to become young leaders in sports in various sporting disciplines as Saint Lucia was preparing for the Commonwealth Youth Games (CYG) which never came off in 2017”.

“The career all started during that time, liaising with the Ministry for Youth Development and Sports and being engaged as a local tutor with Mary Wilfred in the above mentioned Ministry and taking part in sporting activities like track and field”.

Brown continued, “The Technical Official at the time, Patrick Mathurin was introduced and in the process trained a number of individuals, including myself, after which I officiated in a few field events”.

“Three years ago the discussion about female starters came up and being a Correctional Officer, the response was, I don’t have a problem starting. Training was offered by the Saint Lucia Athletics Association (SLAA). I did the training. In December 2019, we had another training session with Lisa Ferdinand from Canada to freshen up on the knowledge and basically that’s where it has been for me”.

“My goal as the first female starter is to inspire other young females to realise; you can do it, no matter what the field is as long as you put your mind set to it. I am happy, I am the first and I can open doors for other females. In December we had a few other females on the programme that came in and started the course, so the future looks bright”.

You have done the Independence Games, National Juniors / Carifta Trials, in terms of nervousness, especially during the explosive events like the 100/200 and 400 meters, what has it been like for you?

Brown replied, “The more you do it, the more you get accustomed to it: at first I was pretty nervous, God, what will I do, what will go on, and I didn’t want to do any mistakes and put the children at fault, but gradually with practice I became more confident and believed in myself, right now the nerves are gone”.

Final words: Brown said, “I just want the young people to believe in themselves as much as life can be challenging. You can go hard and give nothing less but your best and by doing that you can achieve anything you put your mind to do especially our women, we can and we will, go for it!!”,