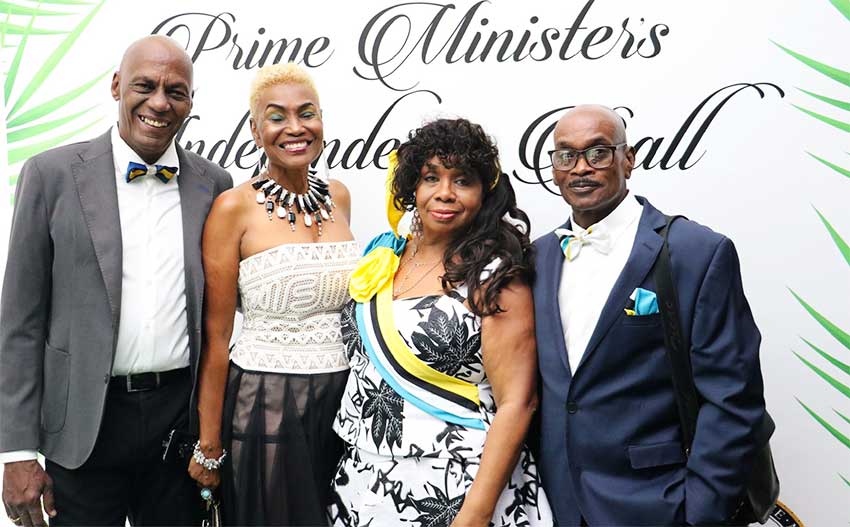 Since inception in 2017, this charitable fundraiser event has helped 23 charities and organizations, in the process distributing well over half a million dollars to such causes. In some cases, tears of joy have been shed by some recipients of the funds. In 2019 the PM’s Ball contributed a whopping $250,000 to the rehabilitation of the Cornerstone House for the Homeless and Dispossessed as well as provided a year of additional subsistence for the House. As the sums raised last year far exceeded expectations, the Prime Minister was able to assist 15 other charities in a substantial way. This year the Prime Minister Honourable Allen Chastanet has already highlighted that among this year’s beneficiaries are the Saint Lucia Crisis Centre, the Boys Training Centre and the Mongouge Club 60 & Adult Day Care Centre.

This year’s night of giving back, the 41st Annual Prime Minister’s Independence Ball, was held on Saturday 22nd February, under the theme “A Night in the Rainforest” with Bird of Paradise flowers adorning tables and sights and sounds of the Rainforest pervading the Rodney Bay ‘Grand Pavilion’ tent. The five hundred patrons at the Ball equally embraced the theme with their attire, by mixing traditional Independence colours with tropical touches. Host Tracy George explained that the theme was chosen because of the importance of the rainforest, describing it as “the lungs of our planet” and urging that “we must work to preserve and protect them.”

The PM’s Independence Ball continued the amazing celebration of Saint Lucia’s 41st, by featuring some incredible local talent. The Pan Time Steel Orchestra welcomed guests and Augustin “Jab” Duplessis played along with singers- the Lucian Trio of Yasmine Butcher, Aneshar Antoine and Dianna Phillip who stunned the audience with their sky-reaching vocals! A special feature of the evening has been an address by an outstanding Saint Lucian, this year, young businessman Rhon Stephens from Vieux Fort fit the bill and delivered an excellent address. The special guest speaker, specially invited personally by the Prime Minister, was multiple Grammy award winner Gordon “Commissioner Gordon” Williams. The son of Saint Lucian parents “Commissioner Gordon” is a music recorder, engineer, and mixer.

He was recently named as a Goodwill Ambassador for Saint Lucia and has worked with some of the biggest names in the business like Babyface, Lauryn Hill, Diana Ross, New Edition, and Quincy Jones. Williams shared his story of success, expressing that nothing happens by chance and we have to take advantage of opportunities.

“Saint Lucia taught me how to dream big,” he said. “I see that dreams are the foreshadowing to reality. As a man thinketh so he shall he become and I am a living example of that. I started a music and recording academy and I now pledge that I will bring my academy here to Saint Lucia.”

The announcement received a rousing round of applause as Williams explained how music can help young people and how honoured he was to be made an official Ambassador for Saint Lucia.

During the event, Minister with responsibility for External Affairs, Honourable Sarah Flood Beaubrun, handed out tokens of appreciation and thanked the Diplomatic Corps for all that they do to help our island in various ways and for always supporting the events surrounding the celebration of our independence.

In his short address at the Ball, Prime Minister Honourable Allen Chastanet, thanked his wife, Raquel Du Boulay-Chastanet, for her continuous dedication to hosting the event, as well as Drenia Frederick for her assistance with producing it. He also thanked the guest speakers and all the patrons of the Ball.

“Looking around, I see faces that have been here every year since this event started and it is a source of immense pleasure and appreciation to see that it keeps growing and getting bigger and better year after year,” said the Prime Minister. “I want to make the point that this is no ordinary ball. In fact, it is a major fundraiser in support of causes that together play a tremendous role in the social development of Saint Lucia helping causes that would otherwise be hard-pressed to raise monies to finance their programmes.”

The Prime Minister spoke about the optimistic outlook for Saint Lucia and highlighted the immense talent and creativity which exists within our people. As part of the evening’s presentation, the Prime Minister and the Minister for Culture Honourable Fortuna Belrosehonoured Saint Lucia’s newly named Goodwill and Brand Ambassadors and gave them a token of appreciation. The Prime Minister also gave Special Awards of Recognition for Excellence to young cricketer KimaniMelius, Businesswomen Margaret Desir and Catherine Cooper and Entrepreneur Eaton Jn Baptiste for their contributions to the development of Saint Lucia. The Prime Minister pledged his support to recognize the excellence of outstanding Saint Lucians and the positive impact they are having, to let them continuously know Saint Lucia supports them and advised that these Excellence Awards will become a new feature of the Ball.

Of course the PM’s Independence Ball ended with desert and dancing and based on preliminary figures raised from the auction and ticket sales, will be able to make substantial donations to the named charities.

The Office of the Prime Minister is thankful to all who helped to organize and execute this year’s event.