By Earl and Chad Bousquet 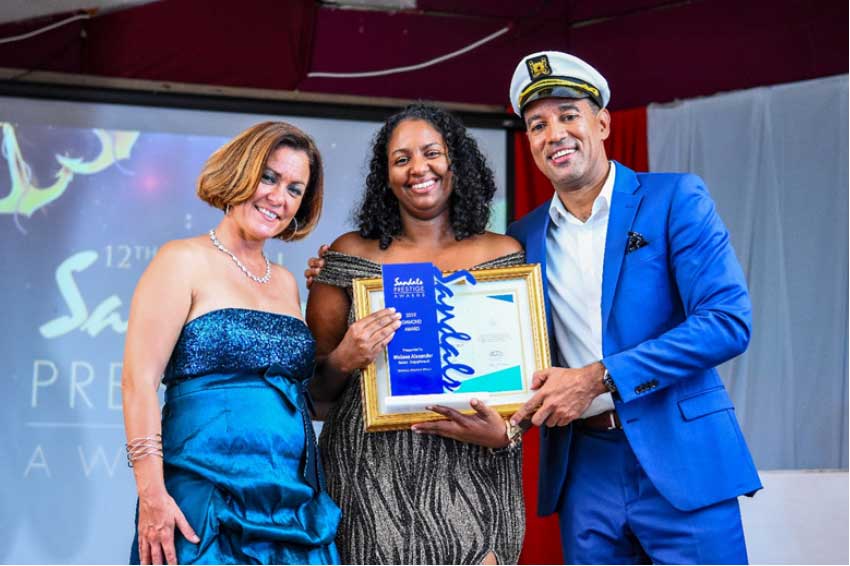 Imagine sitting among hundreds of workers and managers cheering heartily as fellow colleagues lined-up to collect awards and rewards in recognition of their extra-sterling contributions to the business’ success for yet another year.

That’s not difficult to imagine. But place that image in the context of the annual staff awards ceremonies held at the workplaces of the island’s largest private sector employer — the three Sandals Resorts here — and the image gets a 3D uplift.

Sandals Prestige Awards have been hosted here annually over the past 12 years at its Grande, La Toc and Halcyon resorts, where best staff (managers too) are awarded for their performances – and with prizes including money, gadgets, holidays and job promotions.

La Toc held their awards a few nights earlier and The Grande would be next on the following night, but on January 30, Sandals Halcyon Club St Lucia opened 2020 with its awarding-by-rewarding ceremony at The Mirage suite.

‘A Nautical Journey’ was the night’s theme and it started with a brief Gilligan’s Island-inspired video featuring a shipwrecked Admiral (Halcyon General Manager) Christopher Elliot lying face-down on a beach, awakened to recovery by waves washing his face.

The lucky landlubber, washed ashore not too far from his hotel in the near distance, also found an abandoned surfboard awaiting him as soon as he ventured ashore, with which he safely paddle-surfed his way, by hand, back to Halcyon’s fabled Fisherman’s Wharf.

Helped aboard by surprised staff, the distressed manager was hauled-up just in time to rush to his room to bathe, shave, get dressed and head to bridge at The Mirage to issue the commanding order to lift anchors and start the night’s sail-away.

‘Anchors Aweigh!’ was The Admiral’s Order, after which Elliot welcomed his shipload of guests, the majority fellow sailors of all ranks, crewmembers to be accoladed with awards for their roles in sailing their good ship through charted waters, whatever the weather.

But The Admiral dutifully warned his crew that while they had again successfully adapted to the winds of change on familiar high seas, they should also guard against just basking in the sunshine of their victories.

Halcyon’s focus in 2019, he said, was on all-round growth and improvements.

Nine staffers were sent to properties abroad, including Turks and Caicos Islands (TCI) and The Bahamas, where they excelled in official undertakings, one even being nominated for the Top Employee Award in TCI from a list of over 1,900 employees.

But above and beyond it all, the Sandals brand had again left its deep footprint in the sands of global tourism as SRI had again been named World’s Best All-Inclusive Company – for the 25h consecutive year!

So, that night out for Sandals management and staff was no regular boat ride.

Sandals Grande Manager and SRI’s Saint Lucia Managing Director Winston Anderson welcomed his resort’s accolades as he briefly addressed the happy Halcyon crew, urging them not to bask in the sunshine of consecutive victories on tourism’s high seas, but to always aim to keep the brand’s record-winning streak running through all properties at all times, in mapped and unchartered waters.

It being Sailors Night with no paid passengers aboard, the briefings from the bridge by the officer corps were as brief as expected, making way for the announcements of the nominated competitors for prizes across departments.

The large crew of men and women superbly outfitted for the occasion were also showing appreciation for being appreciated.

Every Halcyon crew member was a happy sailor that evening, with 14 walking away with hundreds of US dollars, top-of-the-line SMART phones, paid holiday trips at other resorts – and job promotions.

Every winner was more than just a smiling face, no ranks or ropes dividing the 30 managers and 385 staff during that memorable nautical journey on that unforgettable evening when 365 halcyon days seemed to have come together in one night at Sandals Halcyon.

GM Elliot would say (during a quick break organized by PR Manager Rhonda Giraudy): “While winning is always nice, it takes hard work, alongside investment in resorts, as well as in staff training and exposure for the increasing numbers of staff who will have to keep the ever-increasing numbers of visitors happy, in 5-Star luxury.”

The Admiral’s 2020 Vision for Sandals Halcyon? “We’ve been here for 25 years and we plan to be here for another 25.

“We really do want to stay that way, winning all the way — and working much harder to win even more, and always more times than ever before!”