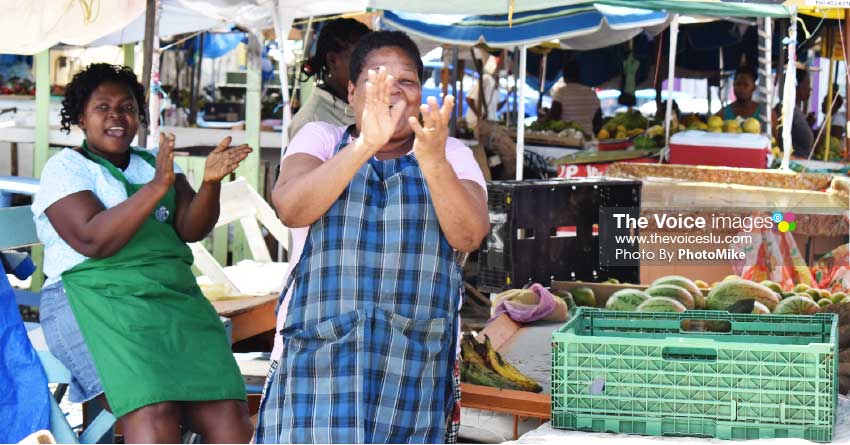 PROVISION vendors at the old fire station site on Jeremie Street are happy where they are and seem prepared to forego the spanking new market structure being built for them at their former location, at least for a short time.

The vendors, yesterday morning, expressed their contentment with their temporary location to Mayor Peterson Francis and other CCC officials during a brief meeting at their current location.

The meeting was to inform them of a new date for returning to their previous location next to the Craft Market. It was also an opportunity for them to air their grievances with the current location and the challenges, including thieves preying on their goods after closing hours. They wanted to know what Francis and his team could do for them in terms of eliminating the problems they face.

But even while Francis was explaining why the original date for returning to their old location under a spanking new market structure was not possible and a new date given, which is mid to the end of next month, vendors were thinking of one thing only: remaining where they are as long as possible.

In fact, one vendor voiced her opinion and gave Francis and his team more than they bargained for when she asked the Mayor to keep them at their current location up until Christmas. The rest of the vendors unanimously applauded her request and called on Francis to return them to their original home in January.

Many of them had voiced their displeasure with the relocation plans as presented by the Castries Constituencies Council, which had informed them, they would return to the new structure in August of this year. The Council had to use force, at one time, to evict some protesting provision vendors who refused to stop vending in front the Craft Market when instructed to do so. This resulted in a ruckus between the all-female vendors and city police that made headlines at all major news outlets island-wide, with public empathy solidly on the side of the vendors.

The new date for completion of the new market is next month, according to Francis. He listed rain and the sourcing of certain materials for the new structure as crucial factors that delayed its completion. Mayor Francis however expressed his delight at the pace in which the market construction was coming along. He said the project remained within budget, however he could not offer any budgetary figures.

The design of the new market is said to complement the existing design of the Craft Market and built to withstand hurricane force winds in excess of 150 miles per hour. Vendors were told that the new market will enable them to operate in a comfortable and aesthetically pleasing environment.