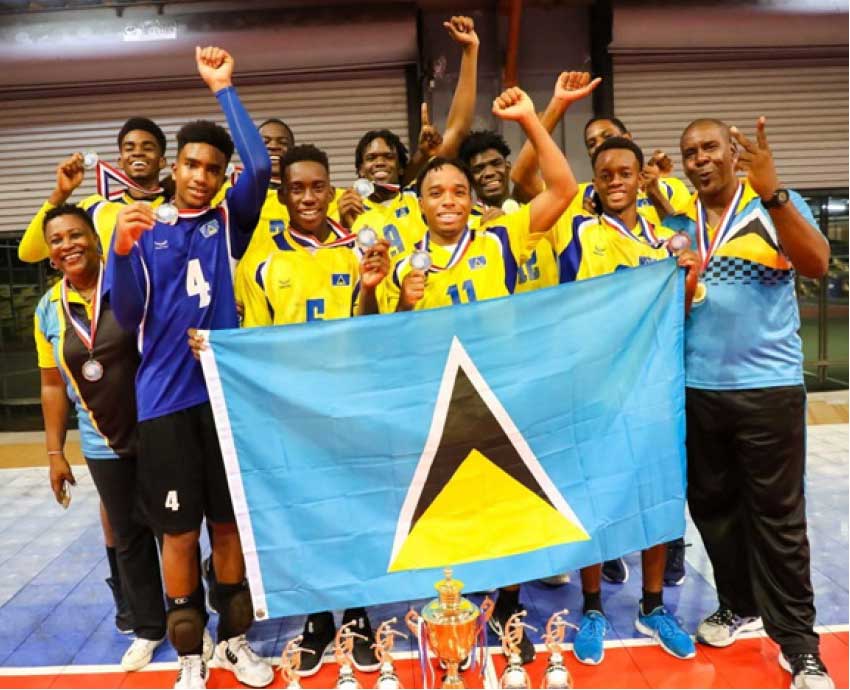 SAINT Lucia’s male Under 21 team mirrored the successes of their female counterparts (one week ago) by winning the Eastern Caribbean Volleyball Association (ECVA) Junior Male tournament. This was achieved when they defeated Saint Vincent and the Grenadines in an epic battle for supremacy which Saint Lucia won 3-2 (25-22, 25 -21, 23-25, 19-25 and 15-9). The match lived up to the predictable expectations of being very competitive and close.

Noah Gaspard (opposite) was the stand out player for the winners as he had a game high 22 points. Noah is left handed and Saint Vincent and the Grenadines had problems in figuring out his mode of attack. Noah was aided by outside hitter Joshua Florent who was also rampant at the net knocking down 18 spikes in his overall tally of 19. Further assistance came in the form of 13 points from Fabio Lamontagne, an outside hitter.

Team SVG also had a varied attack leading with outside hitter Kyle Liverpool with 18 points. Setter and Captain Jamaar Cropper along with Enrico Louraine combined for 25 points but all in a losing cause.

No one team dominated the team scoresheet. Saint Lucia led in spikes 50 to 43 but Saint Vincent and the Grenadines took the edge in blocks 8 to 7 and also service points 8 to 5.

By the time the coaches were interviewed Coach Verdant’s heart was still racing from the tension of the game. “For the first time in my coaching career that I felt like I would have suffered a heart attack. From the onset of the third set I was at a loss and wondering what was going on, the hits were not going down the sets were double playing almost everything was going wrong. Fortunately for me the setter got it going and our offence was successful once again and I am very happy for that”, he chimed in.

Captain Remy Kernel of Saint Lucia expressed: “To be honest I was a little bit scared when I realised that we were letting the game go especially in the 3rd and 4th sets. So I called in my team and really urged them to give it their all. It was a really emotional and amazing win; even now I am fighting back tears of joy.”

Captain Jamaar Cropper of Team SVG was in tears, sobbing uncontrollable and could not be interviewed.

Coach Vance Andrews gave his version of the game. “We really started terrible. Our passing was under par and hence we could not get the ball up to our hitters. That we rectified in the 3rd and 4th set but our guys seemed to have lost mental focus for a moment in the 5th set and by the time we readjusted St Lucia was on set point. The guys are really down because they felt as if they really could have won that match hence most of them are in tears,” he reported.

Earlier on the night hosts Antigua and Barbuda consoled themselves with the Bronze Medal after defeating Saint Kitts and Nevis in straight sets -(25 -14, 25 -10, 25- 12).

Hence the final positions are as follows: 1. Saint Lucia 2. Saint Vincent and the Grenadines 3. Antigua and Barbuda 4. Saint Kitts and Nevis.

Meanwhile, Joshua Florent of Saint Lucia was adjudged MVP when the dust settled on the ECVA Under 21 male competition. He got a double award in best scorer with 65 points (59 Spikes, 3 Blocks and 3 Service aces). This tally was 6 ahead of his nearest rival in Enrico Louraine of Saint Vincent and the Grenadines.

He was also listed as one of the two Outside Hitters to be awarded in the Best Spiker category. The other Outside Hitter Award went to Kyle Liverpool of Saint Vincent and the Grenadines

Saint Lucia also picked up awards for Best Opposite in Gaspard Noah (37 Spikes) and Best Server in Fabio Lamontagne.

The Middle Blocking awards went to Tejani Harvey of Antigua and Shemor Baynes of Saint Vincent and the Grenadines.

Another double awardee was Enrico Louraine of Saint Vincent and the Grenadines. He was the Best Digger with 32 digs edging Lamontagne by 1 into second place and the best receiver by a long stretch over second place Miguel Bourne of Antigua.

Saint Kitts and Nevis picked up two awards in their baptismal tournament. Elkreen Morton won the Best Setter award by a very slim margin and his teammate Ajani Adams got the best scores of the three Liberoes to be used in the tournament.

Of the 12 individual awards handed out, Saint Lucia took 5; Saint Vincent and the Grenadines 4; St Kitts/Nevis 2 and Antigua /Barbuda 1.