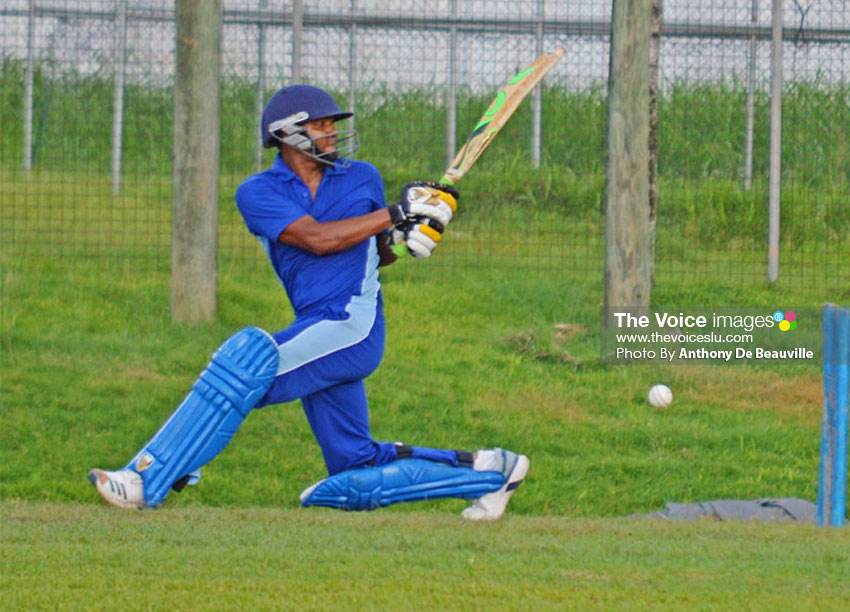 Weather permitting, the top two teams of this round robin stage will contest the Final tomorrow (Sunday 15th) from 3.30 p.m.

Preceding the final at 1.30 p.m. will be a T10 veteran’s exhibition match between South Castries veterans and Northern veterans 11.

The first match in the battle of the winning qualifiers took place yesterday (Friday 13th) between Police and Katahars.

On Thursday 12th, Warriors clinched the final spot in the qualifying round of the SCCA T10 Smash Up with a 6 wicket win over Ravaging Royals.

Winning the toss and batting, the Royals were restricted to 86 for 5 in 10 overs. Chad Polius hit the top score of 47, which included 6 maximums (6s). Denzil James supported with 14.

Bowling for Warriors, Tonius Simon picked up 2 for 4, with a wicket a piece to Shelton Arneau and Devon Eugene.

Chasing 86 runs for victory, the Warriors started with 36 penalty runs as the Royals could only field 9 players. They however got to their target losing 4 wickets. Tonius Simon hit the top score of 23.

The first match in the battle of the winning qualifiers will be played this afternoon from 4:30 between Police and Katahars.

On Wednesday 11th, the Royal Saint Lucia Police Force (RSLPF) cricket team booked a place in the final stages with a 44 run win over Spartan Strikers.

Sent in to bat, Police were dismissed for 123 off the last ball of their 10 overs allotment. Calvin Stanislaus continued his good form hitting the top score of 27. He was ably assisted by Alvin Prosper (19) and Irvin Ferdinand (18). The Police team hit 12 maximums (6s) with Stanislaus and Ferdinand contributing 3 each.

Chasing 124 for victory and a place in the next round, the Strikers were kept in hunt by an aggressive Garvin Serieux who stroked 47 in 20 balls, which included 4 sixes and 2 fours. The dismissal of Serieux saw the Strikers fold for 79.

Barrie Charles and Calvin Stanislaus led the bowling for Police with two wickets each.