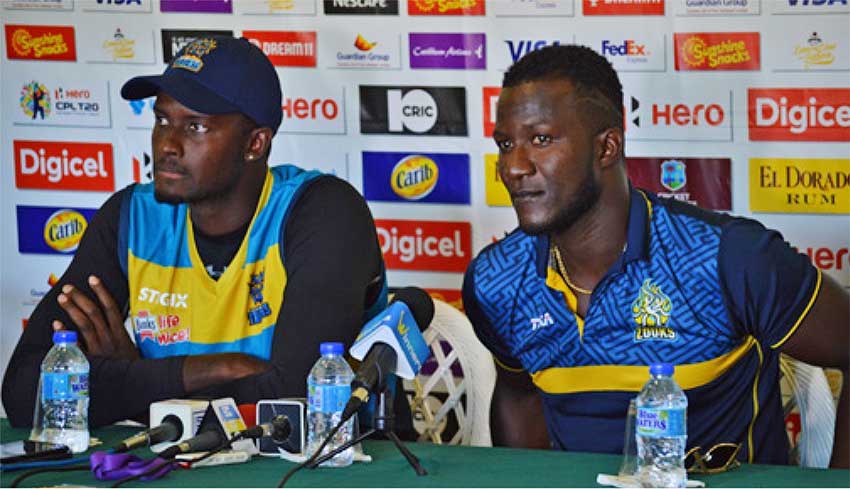 IT is Saint Lucia’s turn to party as the Hero Caribbean Premier League (HCPL) T20 cricket returns to the Daren Sammy Cricket Ground. Like previous years, a huge crowd is expected to turn up to take in the action between defending champions Trinbago Knight Riders (TKR) and Saint Lucia Zouks this evening starting from 8.00 p.m.

The Trinbago Knight Riders are currently sitting in second place with 8 points from 5 matches; while the Saint Lucia Zouks are in fourth place after four matches on 2 points.

The Zouks did not have a great start as they lost their opening game against the Guyana Amazon Warriors and their second encounter versus Trinbago Knight Riders. In their third game, they completely out played the Jamaica Tallawahs at Sabina Park, but went down to the Carlos Brathwaite, Saint Kitts and Nevis Patriots at Warner Park before coming to Saint Lucia for five home games which started last evening against the Barbados Tridents.

Based on previous matches between the two teams, it is going to be a tall order for the Zouks. The last time they defeated Trinbago Knight Riders was in 2016 at Queens Park Oval by 6 wickets. Scores in that encounter: TKR 162 for 6 in their allotted 20 overs; Saint Lucia Zouks, 164 for 4 in 19.1 overs.

Speaking at a Pre Match press conference on Thursday afternoon at the DSCG player’s pavillion, Zouks captain, Daren Sammy said, “I am quite happy with the inclusion of Colin Ingram; he is going strengthen our batting. It’s an area where we lack some experience, so with him coming in and Colin de Grandhomme, the two will put more experience in there. We have had some starts, Cornwall has been providing in that aspect, but we need every individual to step up to the plate and there’s no better place to do that but at home.”

The former West Indies captain said, “Cricket is played in three facets, bat, bowl and field; we have been putting some good performances throughout the competition but it’s been in patches. When the momentum is in your favour you keep it as long as possible because especially in T20 cricket, one ball could change everything around. I am looking forward to these games in Saint Lucia. I am very excited about what’s in store for us”.

“I have always been aware of my role in sports in Saint Lucia,” he added. “Ever since I set foot on a cricket field representing Saint Lucia, Windward Islands and the West Indies team, there has always been that added responsibility that comes with it, and over the years I have responded quite well to that. I know the fans are passionate, the entire team… they are aware of what’s at stake. Everything we do is geared towards winning. For my personal game with the goals that I have to be back into international cricket representing the West Indies in T20 cricket, I have to come out and perform. Trust me, nobody is more aware than I am.”

The Barbados Tridents took on the Zouks last evening and captain Jason Holder at the Pre Match press conference said, “We have been hit with a few replacements and we have lost a few Pakistani players including Alex Hales who has gone back to play a final for his county. I think it is an opportunity for the local players to step up. The CPL is a West Indian tournament; it is a perfect opportunity for our youngsters to come into the team and make their name on this circuit. The balance of the team is pretty good; it’s just a matter for us to perform our roles.”

He continued, “When you look at the various franchise cricket tournaments around the world, the teams who are successful have strong local players. It’s a situation for us to call our local players to step up… but when you look at our dressing room, we have quite a few experienced players to call upon, and once you mix that with the local talent that we have, I think that’s more than enough to win a cricket game”.

After losing to the Saint Kitts and Nevis Patriots in the Super Over, Assistant Coach for the Trinbago Knight Riders Imran Jan said, “As a team you don’t go out there to lose any match. We had four wins and getting into that game we had our plans; certain things probably didn’t go our way until the 20th over. In any completion you don’t have any one team winning every game and championship. If we had to lose a game, that was probably the right time to lose to re-access, have a look at where we are at, and how we go forward in the tournament.”