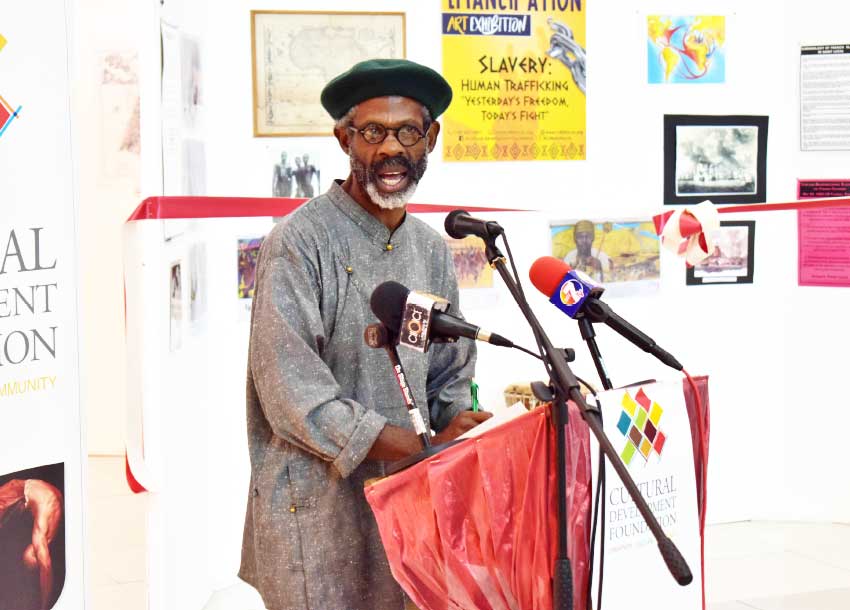 THE Cultural Development Foundation (CDF) in collaboration with the National Archives Authority of St Lucia, the St Lucia Archaeological & Historical Society and the Baywalk Shopping Mall has launched the 2019 Emancipation Art Exhibition. The theme for this year’s Emancipation Exhibition is ‘Slavery: Human Trafficking: “Yesterday’s Freedom, Today’s Fight”.’ The opening ceremony of the exhibition took place on Monday August 19th on the second floor of the Baywalk Mall in Rodney Bay. The exhibition will run until August 30th.

The phrase ‘Human Trafficking’ in the context of the theme was explained by Celeste Burton as the “Trafficking of our ancestors from homelands to colonised countries.” Burton said that the fight for freedom did not end with Emancipation and that through the exhibition of “Artistic expression and the celebration of our cultural heritage, we wish to transport our community to a new place and to develop in the minds of our people an acceptance that the fight is still on.”

The centrepiece of the exhibition was a wooden sculpture depicting the “Crucifixion and Struggle of the Human Spirit”, which the curator Laurent Jean Pierre later described as a sculpture which “speaks to our struggle; speaks to our battles; speaks to our tribulation; speaks to our deliverance… and it goes on to speak to the life on the plantations; the atrocities and the pains and suffering of a people in exile.” This sculpture was made from red cedar and was produced by Francis Josephat and Martineaus Francois. A number of other items, including prints of historical documents and African artefacts were also put on display for members of the public. Frans Van Santbrink said that it was both an honour and a pleasure for the Management of Baywalk Mall to participate in the exhibition.

nnings of the enslavement of the African people. He said that descendants of slaves must go on to tell their story so that it is never forgotten. He said that people who have been oppressed can turn around and become oppressors themselves, and for that reason it is important for people of African descent to remember their story in order to guard themselves against a second wave of oppression and against oppressing other people as well.

The exhibition, according to Jean Pierre, was also a tribute to the ‘Nég Mawon’ and ‘Negress Mawon’ and the different people who fought for the liberation of the African Slaves. He mentioned Saint Lucia’s first Freedom Monument, sculptured by Ricky George, which was recently erected in Soufriere. “Thank God we now have a freedom monument in Soufriere where the guillotine was laid… now we have a freedom monument reaching higher than the steeple of the church saying, ‘church and state could not keep us down in our struggles and in our battles’, but the battle continues and this is the essence of this exhibition.” He remarked, “We are people who have survived one of the greatest atrocities and there is nothing we cannot surmount if we overcame slavery.”

Margot Thomas, in her address, emphasised the need for parents to help their children understand the importance of slavery and emancipation in relation to their lives. “Because of slavery Black people showed that they could overcome; Black People showed that there was within them that essence and that ability for them to bring the oppressors down.” She urged Saint Lucians to come to Baywalk Mall to see the exhibition. She also called upon the Government to make financial provisions annually toward the celebration of Emancipation Day. She went on, “We spend so much money on Carnival, and we spend so much money on other things… but things which are essential to our soul, to our essence, to our being, to help us be better people… I think we have failed as a country.” She said that it was time for Saint Lucians to recognise what must be done in order for the story of Emancipation to be told. She appealed to the Government to fund the National Archives for the purpose of printing books about exhibitions.

In closing, Thomas recalled an incident which was reported to have happened last week, in which a female Saint Lucian worker was denied a drink of water by her foreign employer. In relation to this Thomas said, “I heard that there was an individual not native to our country who prevented one of her workers from getting a drink of water. I think we should all stand up against this and maybe even boycott that store if we knew what store it was. Our people cannot and must not be treated in this way by people who come in because of our largesse.” She concluded by saying, “Let us be people, let us stand up, let us show the fabric that we are made of.”