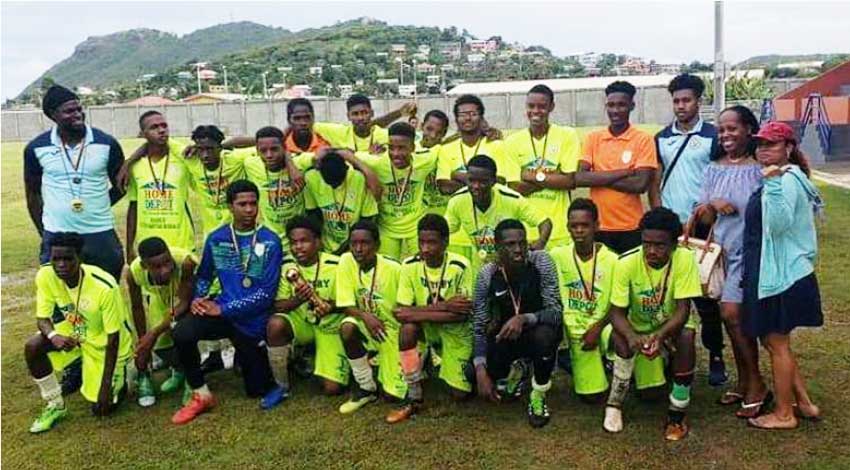 DESPITE the prevalence of intermittent showers, the Third Place Play Off and Finals of the Saint Lucia Football Association (SLFA) Inc. Southern Zone Under 17 Football competition got underway on Saturday 17th August 2019 at the Phillip Marcellin Ground (PMG) in Vieux Fort.

In the Third Place Play Off, Uptown Rebels went down to Black Panthers out of Soufriere 3 – 1. The half time score was 1 – 1.

Black Panthers got their goals from Jalani Adjodha in the 23rd and 76th minute and Emmanuel Tisson in the 62nd minute.

Kendell Clarke pulled one back for Uptown Rebels in the 46th minute.

The grand final was expected to be a keenly contested one but this was not to be as Victory Eagles maintained their unblemished record by trouncing Stable Boyz 5 – 1.

The match which was witnessed by a small yet appreciative crowd saw Victory Eagles surging into the lead with a goal by Darnzel Hunt in the 13th minute. Before Stable Boyz could recover Hunt secured his brace in the 18th minute to make it 2 – 0. Not to be out done Donovan Perpie got in on the action in the 44th minute as the half ended 3 – 0.

On the resumption it was all Victory Eagles as Perpie went on to complete his hat trick in the 62nd and 82nd minute, as they ran away winners 5 – 1.

Wakquim Roland pulled one back for Stable Boyz via the penalty spot in the 61st minute.

The Awards Ceremony followed the conclusion of the Finals.