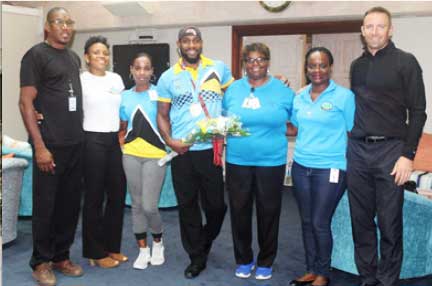 CONGRATULATORY messages continue to pour in from the Saint Lucia Athletics Association (SLAA) to the four Saint Lucian athletes who represented Saint Lucia at the Pan-American Games in Lima, Peru.

As the only athlete returning home directly from the event, Albert Reynolds was welcomed at the Hewanorra International Airport on Monday evening by members of the SLAA executive as well as members of the Elite Track and Field Club, which Albert competes for.

Reynolds is the reigning Senior Sportsman of the Year. During this year’s Games, he improved his national record set earlier this year with a javelin throw of 82.19 meters on his final attempt. That mark, just shy of the Olympic qualifying mark of 83 meters, moved him into bronze medal position and secured his place on the podium.

Multiple Sportswoman of the Year Levern Spencer continued to make her country proud as she was once again the Pan-American Games champion in the Women’s High Jump with a mark of 1.87 meters.

Not far behind her and just missing out on a podium finish was Jeannelle Scheper, who placed fourth in the competition with a jump of 1.84 meters.

Sandisha Antoine continued her representation of the nation in the Triple Jump. She completed the meet in 12th place with a mark of 13.15 meters.

The SLAA has extended its appreciation to the coaches and team managers who assisted the athletes while in Peru.