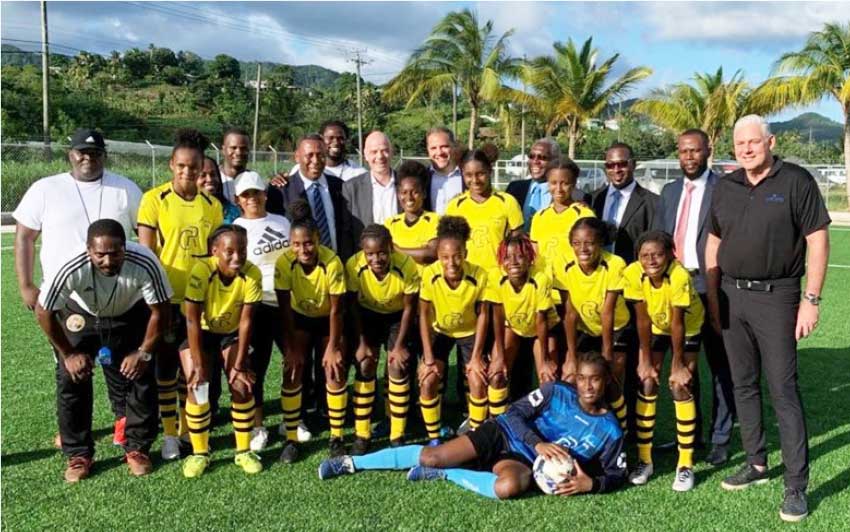 CONTINUING a three day tour of the Caribbean, FIFA President Gianni Infantino paid a five hour visit to Saint Lucia on Saturday 10th August 2019. During his stay he met with the highest civil authorities as well as the local football community.

Together with CONCACAF President Victor Montagliani, President Infantino had the opportunity to discuss with the Prime Minister Allen Chastanet the important role football plays and can further play in the development of the island.

Following a visit to the Saint Lucia Sports Academy, the delegation journeyed to the recently inaugurated FIFA Forward Project in Grande Riviere, Dennery.

After meeting the National Under 17 Girls Football Team, Infantino indicated that the Saint Lucia Football Association is achieving concrete results and the progress made is clearly visible here in Saint Lucia as they are putting words into action.

The full size artificial turf which represents the first phase of the FIFA Forward funded SLFA Technical Centre, illustrates the good work being undertaken by the Association; for in the words of the FIFA President, developing football on the island represents an investment for the future generations.

President Infantino and the delegation then returned to Castries where they were introduced to the Saint Lucia Football Association Inc. Executive Committee at its Head Quarters in La Clery.

Following this he embarked on his final destination for the day Antigua and Barbuda. Infantino concluded his three-day tour of seven Caribbean Member Associations on Sunday 11th with a visit to the US Virgin Islands.