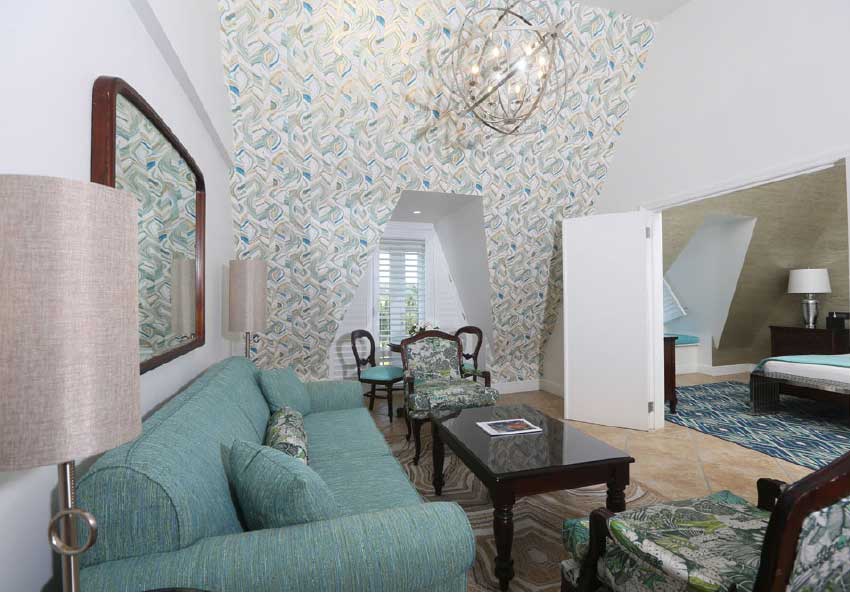 Coco Palm launched their newly renovated Pool and Garden View Suites during the recent North America Showcase held on island. The new Suites treat guests to a truly inspired new look and feel. The contemporary décor update follows the sprucing up of 48 Pool and Garden View rooms in 2018. The suites have a similar contemporary theme to that of the new lobby and executive lounge which were introduced last year with assistance from local interior designer Loraine Moffat and the team from Inside Out.

“We were proud to introduce our new suites during the showcase where we had the opportunity to offer a first-hand walk through of our new rooms,” noted Managing Director Mark Ferguson. “It was very encouraging to see the response from both the trade and our partners who saw the new look. For some it was the first time they had seen our renovations,” Ferguson noted.

The fourth-floor suites all offer a modern and clean finish with aqua blue and green tones complemented by silver finished bedside lamps and a luggage rack at the foot of the bed. The feature wall behind the super king size bed displays a warm hessian textured weave finish, while the lounge area is wallpapered in a green and blue marble effect.  White wooden shutters were custom made locally for the bay windows offering a contemporary look throughout. Eleven of the twelve suites feature a pull-out aqua upholstered sofa bed with two armchairs in tropical fabric.

Lighting has been enhanced with a Feng Shui friendly globe chandelier along with a floor lamp with a marble base, ideal for reading. Electrical outlets have also been enhanced with dual 110 and 220 sockets and USB ports both bedside and in the lounge. Suites can cater for a family of four with two kids under 12 years or for three adults. All main bathrooms in the suites are finished with a granite top, silver hardware with double sinks and backlit lighting above.

The signature suite will officially be named the ‘Darren Sammy Suite’ after Saint Lucia’s local cricket star as he was the first to stay in the suite when Coco Palm opened in 2006. The décor will reflect Saint Lucia’s sports hero offering a bespoke finish with a four-poster bed and gold velvet sofa with black and gold cone lighting with a sophisticated look which will no doubt cater to Coco Palm’s VIPs.

Coco Palm’s upgrade was influenced by a cleaner, brighter minimalistic look while maintaining the traditionally Creole décor and signature black and white tiles in the lobby. The executive lounge of the lobby is outfitted with pictures of West Indian cricket players decorating the walls, a Lavazza coffee station, local beer on tap, a large 50” TV, and laptop working stations. This is most fitting given the number of cricket teams and heroes who have graced Coco Palm since its opening for Cricket World Cup in 2006.