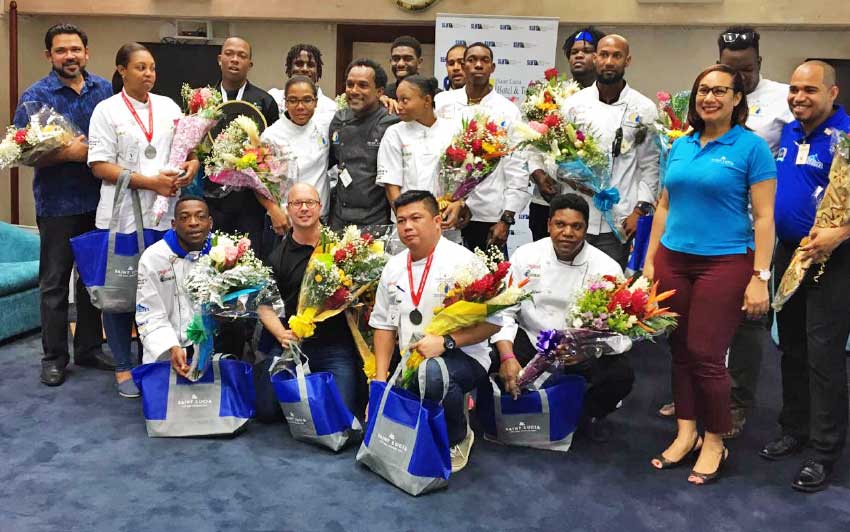 Despite the time shortage for preparation due to their other daily endeavours, Saint Lucia’s National Culinary Team remained determined and motivated throughout the duration of their recent overseas engagement, which saw them representing Saint Lucia at the Taste of the Caribbean Culinary Arts Competition held in Miami, Florida.

On Thursday June 27, the team was greeted VIP style upon their return to the island via the Hewanorra International Airport.

The newly organized and collaborative team, all of whom were driven by the passion of doing what they loved, shared the highlights of their experience with the media and other stakeholders.

Beaming with pride, the team’s manager said one of the main reasons for the team’s great achievements was their high level of team spirit.

“In all the competitions that I’ve been into, this team gives the most love,” Team Manager Chef Richardson Skinner stated. “The comradery between each member was truly inspiring.”

He added: “The fresh team had never been to Miami before to enter this competition, and they managed to pull through with two gold medals and numerous other high-profile awards.”

The team’s gold medals were secured by Zyhim Cadet (Cap Maison) in the Junior Chef Competition, and the other by Emmany Hippolyte (Jade Mountain) in the Caribbean Pastry Chef competition for Senior Chefs. They also won the Best Rum Cocktail Award, and earned an honorary mention in the Caribbean Bartender of the Year category (Craig Andes – Sandals Grande). In the Contemporary Street Pork competition, Pork Shoulder Grande Champion was Juana Alexander (Marigot Bay Resort) and Danny Man (East Winds Inn).

The outstanding performance of the team is truly commendable, and they have already left a solid mark on the international culinary world. The team’s new mission is to re-evaluate and start working towards next year’s competition, to completely sweep the entire competition; after getting some well-deserved rest of course!