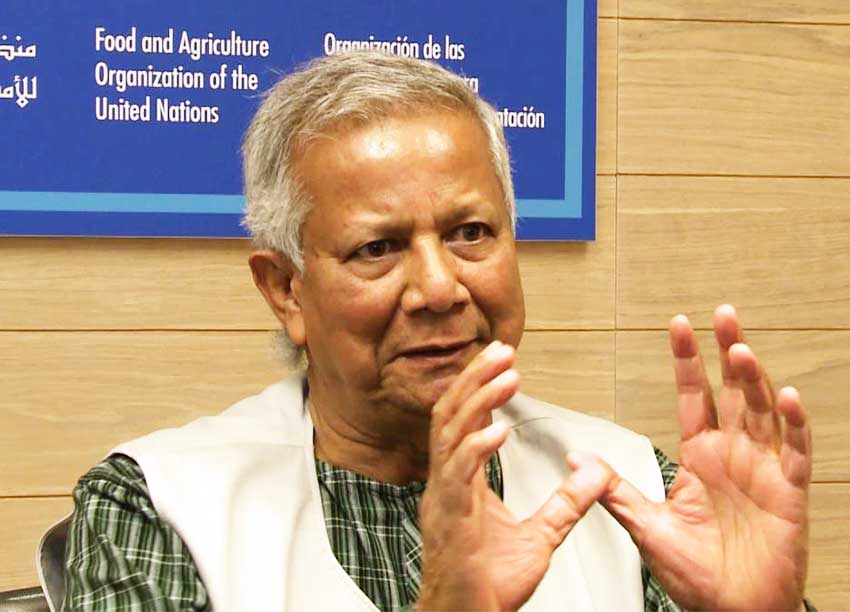 Food and agriculture are pathways to peace in Central African Republic

21 May 2019, Rome – Nobel Peace Laureate Muhammad Yunus today called for a complete change in the ways to address the often-related issues of hunger and conflict. He made the appeal at an event at FAO headquarters in Rome highlighting progress made by the FAO-Nobel Peace Laureates Alliance for Food Security and Peace.

“If you continue the same way as you have done before, you’ll always end up with the same result…particularly on the issues of food security, agriculture, and the environment,” Yunus said. “Unless we think differently, unless we work differently, (these issues) are not going to be resolved”.

The FAO Nobel Alliance, established in May 2016, is an advocacy group of Nobel Peace Laureates focused on breaking the cycle between conflict and hunger.

Hunger and conflict are intrinsically linked. According to FAO figures, more than 60 percent of people suffering from hunger live in areas of conflict. At the same time, there is a growing number of conflicts over natural resources to produce food.

“There can be no food security without peace, and no lasting peace without food security,” FAO Director-General José Graziano da Silva told the audience at today’s event. “Whenever conflict looms large, or hunger threatens peace, we need to sustain rural vulnerable communities. To save lives, we also have to save their livelihoods,” he said.

Today’s event provided a solid example of a new approach to address conflict and hunger. A pilot peace-building project in the Central African Republic works with Christians and Muslims on agricultural production, training and social business development, as well as community dialogue to encourage social cohesion.

It draws on Yunus’ expertise in social business by encouraging agricultural entrepreneurship, particularly among young people, and on the expertise of Yemeni human rights activist and 2011 Nobel Peace Prize recipient Tawakkol Karman through encouraging inter-religious dialogue towards peace.

The pilot takes place on land owned by the Catholic Church outside the capital Bangui where around 3,000 people displaced by conflict live.

“Farmers are excellent entrepreneurs,” Yunus said. He also told the audience that the CAR project demonstrates that agricultural entrepreneurship can help transform communities, which in turn encourages people to stay in their community rather than being forced to seek better opportunities elsewhere.

The project is designed by FAO, funded by the Government of Italy and implemented by the Italian organization Cooperazione Internazionale (COOPI).

Twelve Nobel Laureates are currently part of the Alliance, including the Iraqi Yazidi human rights activist Nadia Mura who was awarded the 2018 Nobel Peace Prize for her campaign against the use of rape as a weapon of war, and the former President of Colombia Juan Manuel Santos who was awarded in 2016 for his efforts to bring the country’s more than 50-year-long civil war to an end.

The Alliance’s knowledge has helped FAO to develop a corporate peacebuilding policy, in support of the Sustainable Development Agenda, which was launched last year.

FAO is also one of the founding members of the Global Network Against Food Crises that prepares the Global Food Crises Report, and that works to coordinate actions to address and prevent humanitarian crises, such as conflict. FAO, with the World Food Programme, also reports periodically to the UN Security Council on the food security situation in countries affected by conflict.

Collectively this work contributes to achieving the Sustainable Development Goals, including Goal 2 Zero Hunger, by 2030.