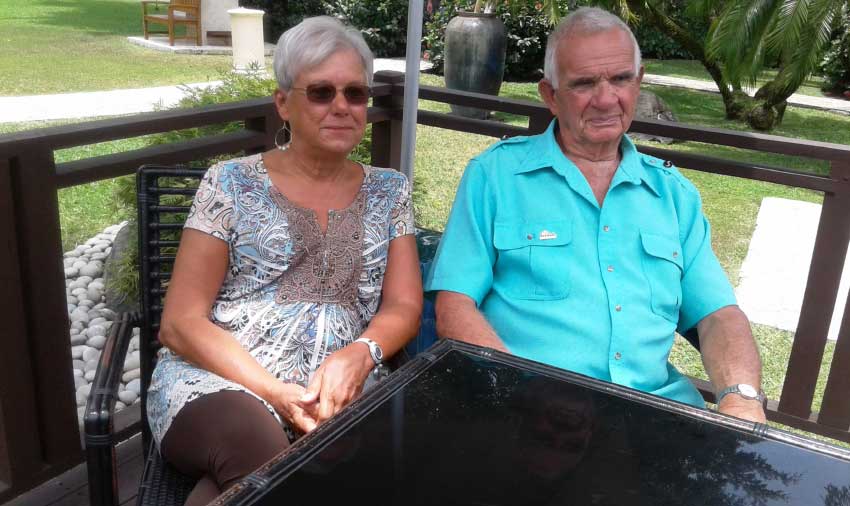 Sandals Halcyon Beach Resort in Saint Lucia is hosting two special guests who have clocked an amazing 900 nights of vacation at Sandals Resorts in the Caribbean.

Edward and Paula Baldrian have come again and again to Sandals Resorts and are now on their nine hundred and twenty seventh night at Sandals. This has placed them in the category of “Ambassador” level, ranking them second in the Sandals Select Rewards programme for guests. Presently, they have booked vacation stays right up to 2020. Seasoned travelers, they have experienced the Sandals product in a number of countries including Jamaica, Grenada, Bahamas, Turks and Caicos, Antigua and Saint Lucia.

So why spend some three years of their lives vacationing at Sandals? According to the couple, it’s all about the service and the staff. Paula reflected on the bonds that they have forged with many Sandals team members. “We consider some of them to be our family. We love them like they were our own children. Over many years we have remained in touch with so many of these lovely people. They have filled spaces in our hearts and some have become like our children. We had done some travelling, to Mexico and Aruba, and wanted to try something new. I did the research and the rest is history. We are now Sandals people. In May 2020, we want to be right back here.”

The Baldrians have been won over by the unique charm of the Caribbean, and say every day is an adventure. “We start mornings with a refreshing snorkel. Today we saw turtles. The water is just so wonderful. Back home in New York, the ocean is cold. But here, it is magic,” says Paula.

Married for 43 years, Paula and Ed say they retired in 1994. Paula enjoyed a successful 30-year career as an engineer with Verizon, while Edward, a painter by trade, was in the construction industry working with crews of between 100 and 130 men on some of his bigger projects.

“Ever been to New York?” he asks, and says with great personal satisfaction, “I worked on the Essex House project near Columbus Circle in New York, and on the Financial Centre in Battery Park. That one was a four and a half year project.” Together they ran a charter fishing business for the better part of 35 years.

Once they retired, they decided to see the world through different lenses and started travelling, first with one trip a year, until they discovered Sandals Resorts in 2004. Fifteen years later, they are Sandals Ambassadors. “We have attained our dreams of travelling and staying married and we still like each other. And we are successful.” This is their high water mark, for Ed and Paula, just a regular couple, simple people, both having attained high school education.

Theirs is a love story that goes back almost to childhood, having met on endless occasions on fishing trips with their families. Later, they met through a friend on the New Rochelle docks and they hit it off immediately. Five weeks later they were engaged and six months later they were married.

It’s no wonder then that they would be drawn to the one place on earth where love is all you need – Sandals!