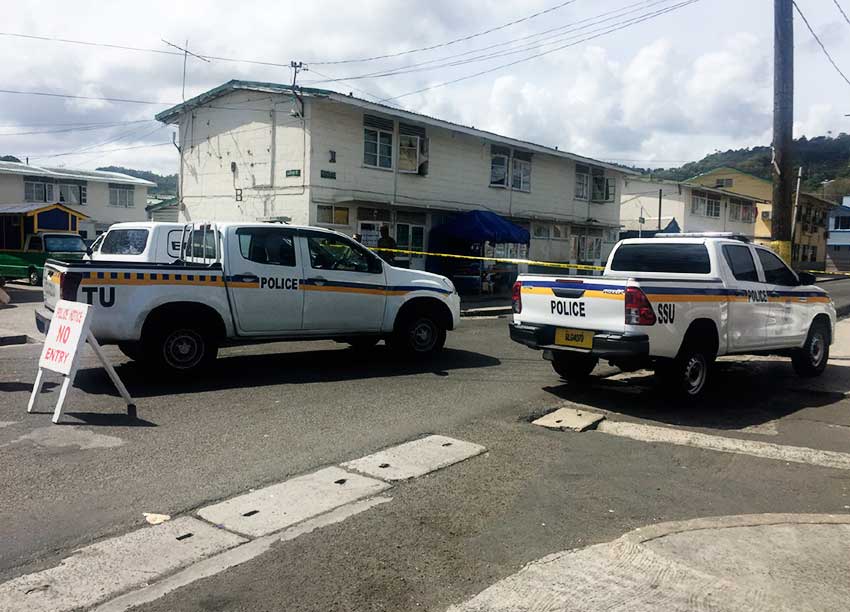 A bomb threat interrupted regular operations in the City of Castries on the morning of Wednesday, May 22nd. The threat was made at approximately 8:30 a.m. to the First District Court. The Mayor’s Office and proceedings at the Castries Constituency Council was also affected as a result. Police cordoned off the area from the corner of Lewis Street and Peynier Street, to the corner of Peynier Street and St Louis Street. Access to Constitution Park was also cordoned off from Laborie Street. Police response to the threat lasted for a duration of two hours.

When reporters tried to solicit from police officers who were on the scene, the name of the institution at which the bomb threat was made, the officers replied that they did not know. Curious school children and tourists who were walking nearby stood taking in the spectacle, as armed police in camouflage uniforms.

The Mayor of Castries, Peterson Francis, was sitting with the market’s fruit vendors on the corner of Jeremie Streeet and Peynier Street as police responded to the bomb threat. When the all-clear was given at 10:30 a.m., the Mayor said that he had not been informed of the incident by any authorities throughout the entire operation. He said that he was greeted with caution tape upon his arrival for work that morning, and that no one had attempted to convey to him the events which affected his office that day. “Up to this point, no one has seen it fit to inform the Office of the Mayor that there is a threat,” Francis reflected.

The Mayor also expressed concern over the causes and consequences of bomb threats. “I am very much affected by this,” he begun. “People must understand that these are serious matters. We have been taking these threats for granted in the sense that police will only come to cordon off the place, and then give the all-clear. These bomb scares have so far been taken for a joke, but we need to think of the likelihood that it could become a serious joke someday,” the Mayor said.

Francis also remarked on the circumstances which sometimes led to bomb threats. He stated, “We might look at these threats on the surface, but there are people with serious issues such as depression and other disturbed states of mind, who are probably making these threats. We must also consider the attitude of some of the workers in our country, who look for every excuse not to come to work. The bomb threats are both influenced and embraced by this negative attitude. Fortunately, no explosives have been found in any threat, but the consequences of the threats themselves are costing the country considerably through the loss of productivity.”

In March of this year, journalist Rehani Isidore, previously employed with Helen Television Service (HTS) was formally charged by police for his alleged involvement in a bomb hoax at the George F. L. Charles Airport. The threat disrupted operations at the airport for over three hours. He was granted bail on two counts of Bomb Hoaxes, to the tune of EC$2500 each, or suitable surety and on his own recognizance for a separate charge of attempted suicide.