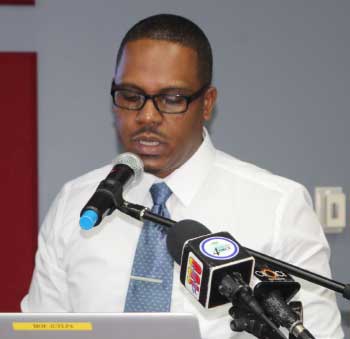 A UNIT within government which was established in August of last year was officially launched on Thursday, April 25 in an effort to establish a coordinated approach to the development of the country’s infrastructure.

The unit was launched at the Financial Complex, Pointe Seraphine and was endorsed by Prime Minister Allen Chastanet, who said it will help in significantly diminishing low implementation of projects.

The Prime Minister believes that the unit when it hits its stride, will be able to pace the economy’s growth and provide the country with an opportunity to understand where it is going or should be going, and determine how much the economy needs to grow.
Cointha Thomas, Permanent Secretary in the Department of Finance, noted that the launch of the unit was testament to the fact that the Government of Saint Lucia recognized that growth is a key aspect of sustained development.

“International best practice examples have demonstrated that units like the National Integrated Planning and Programme (NIPP) Unit are best placed within departments of finance in order to allow for better overall alignment of national vision strategies within the country’s financial planning,” Ms. Thomas said.

Both Thomas and Howard Wells, Director of the NIPP Unit, believe this new approach to planning has some distinguishing elements that will augur well for the development of the country’s infrastructure, however, its success will depend on actions and commitments at various levels inclusive of continued support from the Government of Saint Lucia and a commitment to making the necessary change decisions at the senior-most levels, the availability of the human resources required for the change process, sufficient time and budget allocation for implementation and a host of other factors.

“The other major activity to be undertaken by the NIPP Unit is the review of the Saint Lucia National Vision Plan which was approved in 2008. The Vision Plan outlined bold new ideas that would have transformed many sectors of Saint Lucia, including the total redevelopment of the City of Castries,” Wells said.

He pointed out that since the approval of the plan a lot had changed. For instance, there is now an increased emphasis on climate change and its impact on Small Island Developing States (SIDS) like Saint Lucia.

“It is important to note that the NIPP Unit will not be replacing any existing structure within the Government of Saint Lucia. Rather, the Unit is mandated to network with all departments to provide the strong evidence – the main mandate of based assessments necessary for the justification and alignment of infrastructure plans and strategies, to the country’s national infrastructure priorities,” Wells said.

Thomas believes that the NIPP Unit will reach its full capacity within 24 months and will be able to ensure it executes its main mandate, which is that of ensuring sustainable and effective programme planning.

The NIPP Unit will be guided and supported by UNOPS’ technical assistance team; however, its governing structure is headed by Prime Minister Allen Chastanet and will include the Ministers for Infrastructure, Economic Development and Agriculture, as well as the Chairperson of the National Competitiveness and Productivity Council (NCPC).
The NIPP Unit will also have a technical governing team which will be chaired by the Permanent Secretary in the Department of Finance and comprised of the Permanent Secretaries in the departments of Infrastructure and Economic Development, as well as personnel from UNOPS and the Executive Director of NCPC.