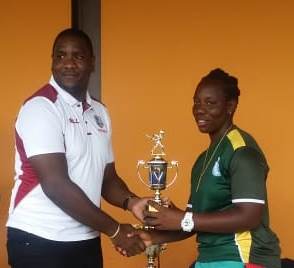 Despite finishing in second place in the Trinidad and Tobago Under-19 Women’s T20 Invitational, Windward Islands’ captain and Under-19 player, Saint Lucia’s Qiana Joseph has successfully led from the front.

Joseph had been frequently raising her bat past the half century mark performing exceptionally well in five consecutive victories versus Jamaica, Barbados, Guyana, guest team Canada and host country Trinidad and Tobago.

Perhaps their toughest opponent was home team Trinidad and Tobago who also played undefeated, but with a captain’s knock of 53 and a total score of 150 for 5 in their allotted 20 overs, Qiana propelled her team to another convincing victory ably assisted by Shawnisha Hector who scored 25 not out and young debutant Zaida James who picked up two wickets.

On Sunday 21st, the Windward Islands U19s played Trinidad and Tobago in the final at the National Cricket Centre (NCC) in Couva. Unfortunately they were unable to repeat their winning fortunes as they did in the preliminary stages of the tournament and had to settle for a well-deserved second place.

Scores in the final; the Windward Islands 117 for 8 in their allotted 20 overs.

Qiana Joseph continued her outstanding batting prowess scoring an unbeaten 65 and Jephenia Joseph 21, which were the most notable scores.

Bowling for Trinidad and Tobago, Djenaba Joseph finished with impressive figures of 3 for 18, while Alysha Gomez picked up 3 for 25.

In reply Trinidad and Tobago scored 120 for 3 in 13.2 overs with Shania Abdool scoring 59 not out.

Bowling for Windward Islands, Zaida James picked up 2 for 10.

At the conclusion of the tournament, the Windward Islands’ Women Cricket Team gained five selectees

Qiana Joseph, who had received other awards as Player of the Match, was crowned with the prestigious title of MVP of the tournament. She also received accolades for scoring the most runs.

Meanwhile, the Saint Lucia National Cricket Association (SLNCA) took the time out to congratulate the Management and the Windward Islands team for their exceptional performance and wish the young ladies continued success in their cricketing careers.