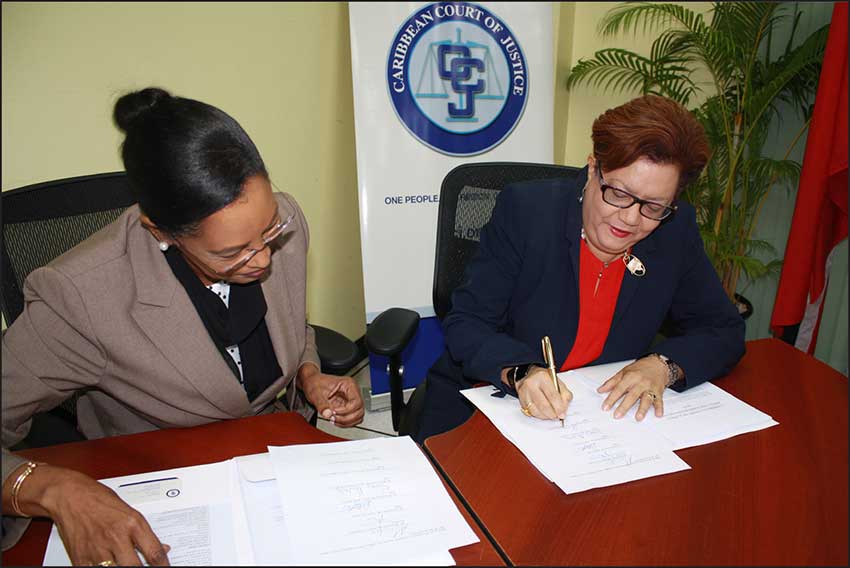 The Caribbean Court of Justice (CCJ) celebrated 14 years of its operations on April 16th, 2019. The Court marked this occasion with activities throughout the week. To commemorate the actual day of the anniversary, the CCJ launched its 2019 Rules of Court for the Original and Appellate Jurisdictions. The Rules of the Court are reviewed every two years and the revisions help to further reduce delay, ensure greater clarity and support advances in court administration. The judges and the staff of the CCJ held a small ceremony to celebrate the anniversary and to witness the signing of the Rules.

Additionally, a brochure containing information about the Court was inserted in one of the daily newspapers in Trinidad and Tobago to allow people an opportunity to learn about the Court. It is hoped that there will be similar initiatives with other newspapers throughout the region going forward.

The President of the CCJ, the Hon. Mr. Justice Adrian Saunders stated, “The CCJ has much to be proud of in its 14 years. In 2018, we delivered our highest number of judgments in a year in the Appellate Jurisdiction, 34 in total, and we tried seven cases filed in the Original Jurisdiction, where we generally had two each year.  The increased use of the CCJ seems to reflect growing confidence in the Court and recognition that we play an important role in the Caribbean.”  He noted that the Court also launched its Strategic Plan which will direct activities over the next five years.  “One of the strategic issues identified when we were gathering data to inform the plan, was the need for increased communication. With CCJ Week, we are beginning to provide our stakeholders with increased information while we continue to produce excellent work in our judicial area”.

The CCJ will also reveal a new design for its website, which can be found at www.ccj.org, during the week.  The new design will reflect a modern aesthetic and features will include an enhanced search for judgments and a new Court calendar on the homepage.

The Court welcomed the public to its headquarters in Port of Spain on Wednesday, April 17th. Information about the Court was shared, with an interactive tour of the courtroom and a demonstration of the technology that underpins the Court.