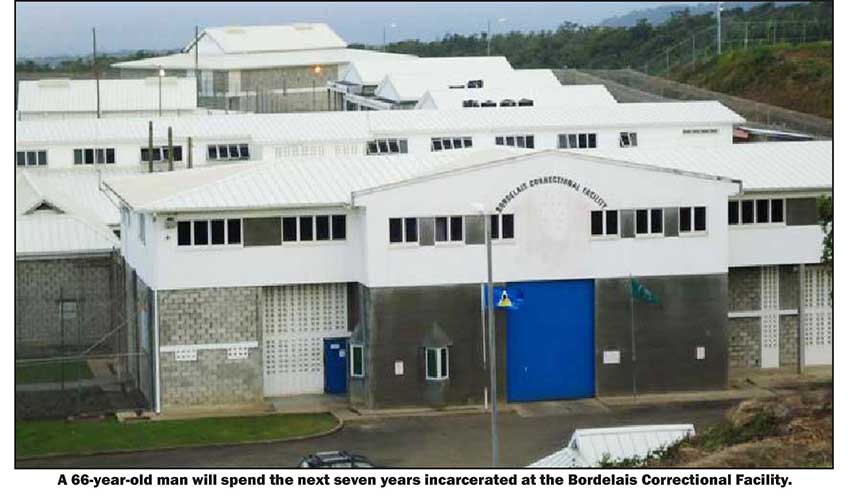 Lamenting the increasing frequency of cutlass attacks which normally result in the loss of limbs or the loss of life, a high court judge last month sentenced a 66-year-old man to seven years at the Bordelais Correctional facility, after taking certain factors into consideration.

Judge Georgis Taylor-Alexander handed down her sentencing decision on Raymond Popo who was indicted for the murder of Cleton Justin but who, at his arraignment, pleaded guilty to manslaughter and not guilty to murder, which was accepted by the Crown. The two were said to be friends.

The facts of the case as contained in court papers revealed that an argument ensued between the deceased and the Defender (Popo) at a shop in Morne Panache, Dennery. The pair had been known to argue frequently despite being in each other’s company all the time.

The Post Mortem Examination Report of Dr. Heather Emmanuel dated 6th March 2017 stated that the cause of his death was due to haemorrhagic shock, secondary to the chop wound to the neck. In his statement under caution, Popo stated that while he was at the shop, the deceased entered the shop and there was an exchange between them. The deceased accused him of interfering with his brother’s girlfriend and threatened to harm him. Popo explained that he had gone outside the shop to smoke a cigarette, with his back to the shop when he felt a blow to his back. According to him, he immediately reacted by swinging his cutlass and it made contact with Justin’s neck.

In court documents, community residents described Popo as a quiet, friendly, helpful and loving individual, who was not a troublemaker. Persons who knew them both recalled them as being close friends who socialized together. According to residents, the two ate and got intoxicated together and would normally sleep underneath peoples’ houses until they recovered.

In the court documents, a probation officer related that Popo lamented not being able to understand himself after the incident. He felt that Justin’s behaviour had caused him to react in the matter in which he had. He stated that he was in shock and stood in the same spot for a while, knowing that he had never found himself in a situation like that before. Popo related that were he to relive the event, he would not have confronted the deceased nor provoked him. He added that had he seen the deceased coming towards him he would have reacted differently.

According to the court papers, Popo deeply regretted the situation and explained that he used to be friends with the deceased and they had no prior issues. He stated that although his action was not deliberate, he accepted full responsibility and pleaded with the Court to be lenient in sentencing him.

Judge Taylor-Alexander noted that the offence of manslaughter carries a maximum penalty on indictment of a life imprisonment however, after hearing oral submissions by Popo’s attorney Jeannot-Michel Walters and Daarsrean Greene, the Director of Public Prosecutions, who appeared on behalf of The Crown, submitting that the established benchmark in this jurisdiction for manslaughter is 15 years, decided to acquiesce to the 15 years.

“I am guided by the established judicial principles of sentencing laid down in R v Sergeant and restated by our Court of Appeal in Desmond Baptiste et al v The Queen. These are stated to be Retribution, Deterrence, Prevention and Rehabilitation. These are the principles that a sentencing judge is required to keep at the forefront of his or her mind when he or she presides over a sentencing,” Taylor-Alexander said.

Stating that she had paid due regard to the victim’s impact statement and the cry for retribution echoed by the family members who continue to struggle to cope with the loss of their loved one, the judge added that she remained apprehensive about the likelihood of rehabilitation of Popo given his age.

“He is 66 years old. The Defendant (Popo) had grown accustomed to his culture and his way of life within his community, which had alcohol and binge drinking at its centre. He admits to having lived that exact lifestyle from age 17. This incident for which he is before the court took place after the deceased and the Defendant had been drinking. Both the Defense and the Crown, submit that despite the Defendant’s propensity to binge drink, which started as a young man, this is his first encounter with the law.

“Both submit that rehabilitation has started during his time incarcerated as he has not been exposed to alcohol, and is reputed to be a model prisoner. The Director of Public Prosecutions suggests that rehabilitation is still possible but it should be obtained within the facility and not on the outside. I have accepted this submission, drawing me to the conclusion that Retribution, General Deterrence and Rehabilitation are the principles to be prioritized,” Taylor-Alexander said in respect to Popo.

She went on to state that the attack, although alleged to have been retaliatory, was brutal, and went far beyond what was required to abate an attack.

“The daughter of the deceased was very emotional when she addressed the Court on how she came to find her father lying in a pool of his own blood. She, together with Editha Stanislas and Perle Stanislas, the mother and sister of the deceased, described the emotional turmoil and psychological impact his death in this untimely circumstance has had on them. The increasing frequency of cutlass attacks is concerning. They normally result in the loss of limbs or the loss of life, as it was in this case. Often the motive for the attack seems senseless and all too often it is accompanied by binge consumption of alcohol. In this case, the brutality is mitigated by the fact that it was provoked. I accept that this is a case of medium culpability. I reject the submission that it was an entirely reflex action as there was no basis for the Defendant to have been in possession of the cutlass at the time. I have settled on a starting point sentence of 14 years,” court documents quoted Judge Taylor-Alexander as saying.

An aggravating factor against Popo, as noted by the judge was that he was excessively inebriated which impaired his judgment, however, mitigating on his behalf were factors including an early guilty plea from him, his previous good character and his genuine remorse.

Judge Taylor-Alexander then deducted two years on her sentencing starting point of 14 years and gave an overall 1/3 discount for the guilty plea sentencing Popo to seven years imprisonment. She also said he is to be credited with time spent on remand, must undergo drug and alcohol rehabilitation therapy and anger replacement therapy.

The Judge directed Probation Services to make counselling services available to the family members of the deceased, especially his daughter, who had witnessed the bloody scene.