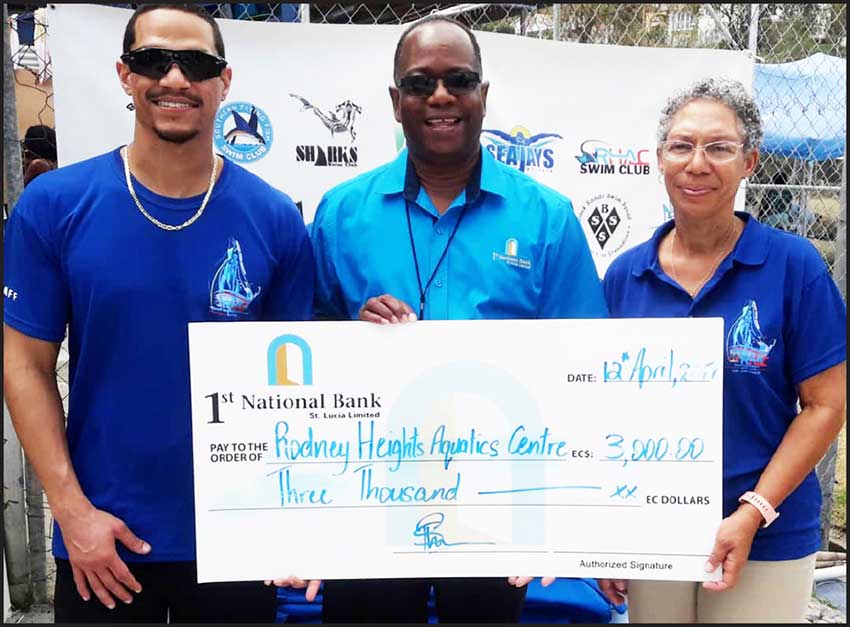 The first event was the International des Antilles-Guyane Esporirs (MIAGE) hosted by the Saint Lucia Aquatics Federation on April 5-7.  The swimming tournament saw participation from the countries of the French Caribbean as well as the countries of the Organization of Eastern Caribbean States (OECS).  The Competition gave our local swimmers another opportunity to compete against swimmers from outside of our region, thus, enabling them to broaden their experience and understand the level of competition that they encounter within the international arena.

The second swim tournament was the local Rodney Heights Aquatic Centre (RHAC) International Swim Meet on April 11-15. This exciting swim championship celebrated a historic milestone of 20 years and Dr. Diane Worrell and her team at the Aquatic Centre must be commended for their perseverance and dedication to the development of the sport on the island.

Over 375 swimmers from islands around the Caribbean participated at the event over a five-day period which also included open-water swimming.  1st National Bank is well aware of the impact sports can have on the human capital of a country and the linkages and benefits to be derived through access to higher education.

St. Lucia held their own at the MIAGE tournament registering second place in both the male and female divisions with the French Club and Black Sand from Saint Vincent and the Grenadines topping the two categories respectively.

The RHAC invitational saw Black Sand of Saint Vincent and the Grenadines topping the overall standings with See jays Swim Club from Saint Lucia coming in at an impressive second place. 23 clubs participated in the tournament.

Both events received tremendous support from swim enthusiast, parents, partners and the general public and by all accounts was hailed a success by the organizers.  1st National Bank is pleased to have supported these two sporting events having recognized the significant impact of sports tourism to the economy of Saint Lucia.

Congratulations to all the participants and medal winners from 1st National Bank!