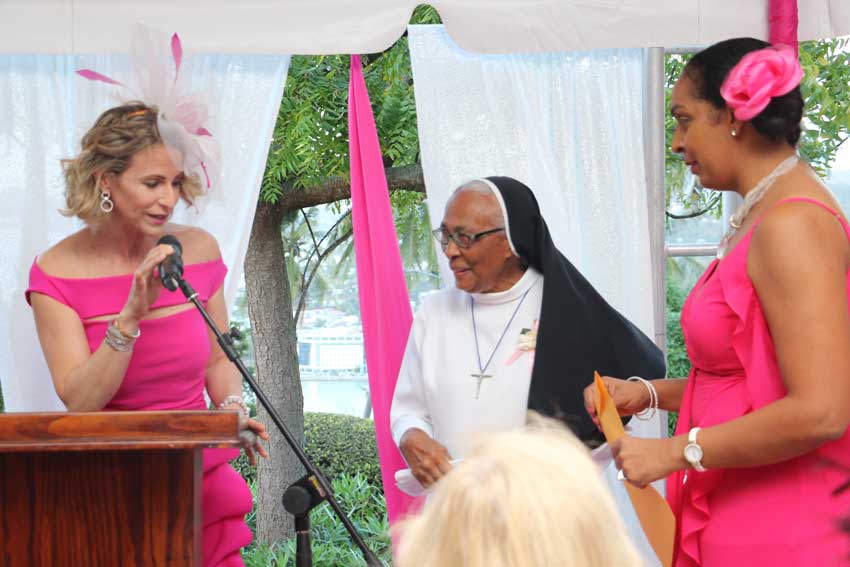 PRESS RELEASE — Anytime women come together with a collective intention, it’s a powerful thing! That was evident at the recently held “Tea & Testimony,” tea party event which saw over 320 women gather at Government House, adorned in pink, for an afternoon of delights and empowering stories from inspiring women both local and regional.

Organized by the Make it Happen Foundation, which is spearheaded by Mrs. Raquel Du Boulay-Chastanet, wife of Prime Minister Honourable Allen Chastanet, “Tea & Testimony” was an opportunity for honest sharing amongst women combined with an element of glamour and fashion to mark International Women’s Day (March 8th) and to raise much-needed funds for the Women’s Support Centre. The Centre is a temporary place of refuge for female victims of domestic violence or sexual abuse and their dependent children. The centre provides a 24-hour service for women in a secure and supportive environment.

The host of the event Mrs. Tracy George kept things lively through an afternoon which featured diverse and compelling stories of survival, acceptance, overcoming struggles and having faith through all things.

The Minister of Gender Relations opened the day and set the tone by stating that “When I talk to girls, ladies, people, who perhaps don’t believe that they too can make it, I remind them very simply that I come from the banks of the Troumassee river in Micoud, and I had to move beyond the parameters that otherwise defined and restricted me. I had to determine a path for myself as a little village girl.”

Following the powerful voice of Dr. Rigobert was educator and widow of the sixth Prime Minister of Barbados, Mrs. Mara Giraudy-Thompson, who also spoke about her early childhood in Saint Lucia. Thompson took the audience on the journey that would bring her to one day become the First Lady of Barbados and to then go on to win the special by-election to succeed her husband in the Saint John constituency in 2011. Her compelling story of love and loss moved everyone in the audience.

Up next was the first female president of the Saint Lucia Manufacturers Association and founder of the St. Lucia Sickle Cell Association Paula Calderon. Among other things, Mrs. Calderon spoke about losing her husband, building her business, overcoming the challenges of being married to a politician, how many of her leadership qualities arose from her active netball and physical education background and explained how she spent most of her life turning negatives into positives.

Ms. Roberta Polius, a cancer survivor who willingly offers support to other women diagnosed with cancer, tackled the issue of overcoming depression and anxiety. “I survived to give hope, to be hope,” were just some of her inspiring words.

The inspirational testimonies continued with Mrs. Michelle Anthony-Desir telling her story of performing a constant balancing act in terms of juggling her career with the demands of being a wife and a mother and everything else, “without a manual!”

]The day was not without its light moments, as Mrs. Du Boulay-Chastanet shared some funny stories behind her secret to cooking a healthy meal for the nation’s Prime Minister. Mrs. Chastanet also acknowledged former First Lady Mrs. Rosalia King as an inspiration to her and presented her with a gift.

MACO Magazine’s CEO Neysha Soodeen-Thompson’s lively and effervescent presentation detailed her own struggles with cancer but focused on the positive attitude which helped her to overcome it and she also offered some excellent advice for prospective entrepreneurs.

Sister Claire, who many in the audience had come to hear, moulded the lives of many of the women present at the event. She reflected on her upbringing in Trinidad and personal journey and talked of how she upbringing shaped her career choice. She also stressed that no matter what the challenges are in life, her experience has been that putting everything in God’s hands would allow the brunt of the burden to be lighter and the journey easier. Mrs. Du Boulay-Chastanet presented the revered former secondary school with a token of appreciation for all that she has done to shape and inspire generations of women in St.Lucia.

The event ended on a commanding note with Dr. Nadine Collins who delivered a powerful and uplifting motivational message at sundown about sisterhood and faith. The audience was genuinely moved by her address and as the last speaker of the day, she definitely played a huge part in the ladies leaving the event on a high.

The afternoon also featured an exciting raffle as well as door prizes and a live auction with luxury items such as hotel stays, perfumes and jewellery. The Make it Happen Foundation was thankful to all those who contributed to the event’s success and Mrs. Du Boulay-Chastanet expressed her immense gratitude to Sir Emmanuel Neville Cenac, Governor General and Lady Julita Cenac, as well as the staff at Government House for hosting the event.

Based on the success of this event and ticket demands already made in anticipation of next year’s event, the organizers are already hard at work planning “Tea & Testimony” 2020.