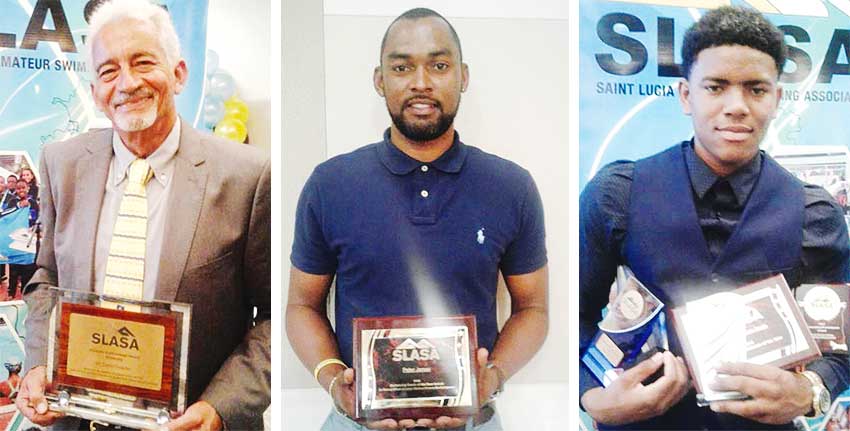 THE Saint Lucia Amateur Swimming Association Sunday held its annual awards at the Harbor Club located in Rodney Bay with the theme “Unleashing Greatness” so0 as to demonstrate the achievements of its swimmers, the perseverance of its coaches, the generosity of sponsors, and the graciousness of their many volunteers who worked tirelessly throughout 2018 and who had represented swimming in Saint Lucia outstandingly.

In attendance were the President of Saint Lucia Olympic Committee Inc, Fortuna Belrose and its General Secretary Alfred Emmanuel, Director of Youth Development and Sports Patrick Mathurin, swimmers and other specially invited guests.

The ceremony was addressed by President Eddie Hazell who noted that the future of swimming “in the right hands” looked bright. He indicated that the developmental foundation had been laid.

“We have presented to Saint Lucia and the world, SLASA’s five year development plan which has been rolled out and activated,” Hazell said, reminding guests of the two major initiatives taken on by the Association that includes the launch of the Grassroots Programme and the Signing of Memorandum of Understanding between the biggest club in Martinique and the Saint Lucia Amateur Swimming Association, which was sanctioned by the Martinique Swimming Federation.

The Keynote Speaker, Donovan Williams delivered a powerful address peaking the interest of the invited guests and most importantly the swimmers as he focused on dismissing fears that may lie within and leaving them with five things to remember, Never Quit, Never Settle, Never Give Up, Never Backdown, Never Stop Working on You.

The Association recognized the most improved swimmers of the year from each club. Jeannot Walters, Shawnelle Yarde, Malik Peter, Antoine Destang, Benedict Edmund and Evan D’Auvergne were pleasantly surprised for the recognition of their efforts.

The overall Age Group Awards were awarded to the most deserving swimmers, namely, 8 and under Fayth Jeffrey and James Sylvester, 9 -10 Jasmine Steide and Antoine Destang,11-12 Naima Hazell and D’Andre Blanchard,13-14 Mikaili Charlemagne and Allandre Cross, 15-17 Katie Kyle and Jayhan Odlum Smith,18 and Over Vanessa Eugene and Jean Luc Zephir.

The highlight of the evening was the acknowledgment of swimmers who demonstrated high level achievements locally, regionally and internationally throughout the year. The proud recipients of the Junior swimmers of the Year went to Naima Hazell and D’Andre Blanchard and the Senior swimmer of the Year Katie Kyle and Jayhan Odlum Smith.

Further recognition went to Tessa Charles Louis walking away with Administrator of year award with her club Lightning Aquatics also receiving the Club of the Year Award. The Clubs coach Peter James was the recipient of the Coach of the Year award.

Hilroy Emanus was the proud recipient of the Technical Official of the year award.

Continuing the presentations, the award for extraordinary contribution, selfless example and the elemental goodness of spirit that exemplified The Pat Charles Award was awarded to John Bruce.

Special recognition went to Norman Barnfield, Canadian Coach who has contributed to swimming in Saint Lucia.

The inclusion of this new presentation of awards, the Lifetime Achievement Award was presented to two individuals who have served the swimming fraternity over a decade, Carol Devaux and David Peterkin.