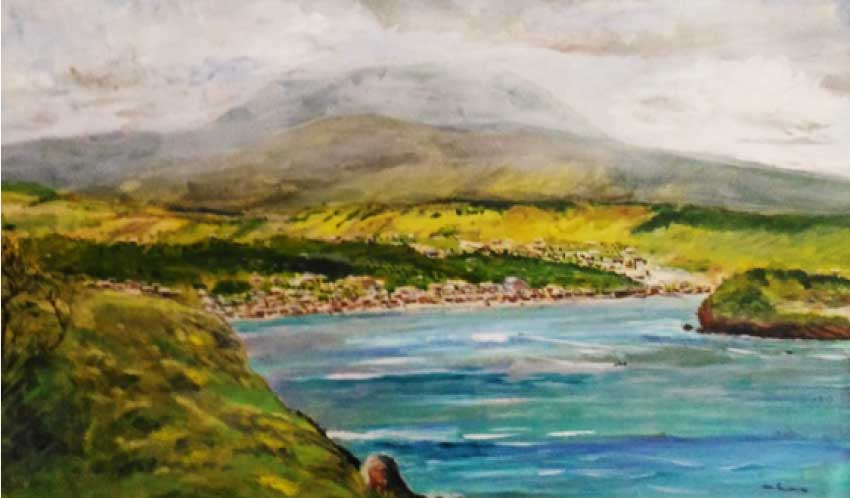 RON SAVORY. He was brilliant, complex and funny!

Born to Clarine Dewar and Neil Savory, he was the youngest of the 4 boys they managed to have before Neil’s untimely death in 1934. Ronnie was only 3 months old. In the family they were known as “Neil the devil and his band of cut-throats”! In later years they became the ‘Savory” boys – Dickie, Ivan, Colin and Ronnie.

He grew up with a strong mother in an extended family filled with strong women. His male role models were his uncles, some of whom were not much older than he and his brothers.

Ronnie followed his older brothers to Queen’s College. He then joined the Public Service and worked at the Lands and Mines Department. He played basketball for fun and started drawing and painting.

In 1960 he married Sheila, daughter of well-known Berbician Charlie Hancock. Shortly after they married Ronnie was posted to Kamarang in the Mazaruni District. Sheila and Ronnie set up house in the “bush”. In 1961 they were blessed with their daughter, Lois.

After Kamarang Ronnie and Sheila went to Lethem; it was most interesting to see the change in his painting. We were now treated to the awesome beauty of the Rupununi Savannahs and the lovely Pakaraima Mountains. I have never been to the Rupunini but I certainly loved seeing it through his eyes.

In the late 60’s the Savorys moved back to Georgetown and Ronnie went to work at The British Council. Now involved in media and culture he nevertheless remained the artist. He went to the BBC Training School in the 1960s and worked with engineers, architects and museum curators working in the fields of study and vocation related to development. When he returned he worked for GBS, the local radio station.

His work room was filled with canvases, and paints, and sketches and could often be found enjoying solitude among the paint media. He was involved in the Theatre Guild and assisted with the sound. He had a show on the radio where he played and talked about jazz. He was also a listener. He listened to music and the radio. He and Aunt Sheila spent hours listening to the BBC on the radio.

Ronnie loved music – always! He loved jazz and classical music. He loved sound. He dabbled in electronics. He subscribed to the Audiophile magazine and was always building some revolutionary sound system. I remember the concoction with the amplifier full of glass tubes and all the speakers he put together with parts he imported or bought locally from Affonso’s or Booker’s. Charlotte Street was always filled with music. He had an ear for fine sound and loved KEF speakers and Marantz amplifiers.

In 1966 Sheila and Ronnie were blessed with their first son Stewart. A year later Ian came along.

By this time the family had moved to 11 Belvoir Court. It seemed really far away from Charlotte Street; riding along Sheriff Street against the sea wall breeze to get to them seemed to take forever. Ronnie moseyed around in Georgetown on his Velosolex with the 2 side bags. For those who don’t know – a Velosolex is a motorised bicycle made in France. It had a small engine on the front wheel and you pedalled to get going. A fuel-efficient vehicle, but then Ronnie was an environmentalist before that became popular.

Ronnie set up the bottom flat in Belvoir Court as his studio. It was filled with beautiful paintings and the sound of music from his latest speaker project. I remember when he built a “reflecting” speaker cabinet and turned it to face the wall. He had read about it in the Audiophile magazine and decided to build his own. It was huge, at least 6 feet long, and had 12 speakers in it. It sounded amazing! A man ahead of his time always! Bose is still selling reflecting speakers to the world!

He had exhibitions and shows almost every year. He was involved with the British Council and the USIS Library and his shows were often held there. At some point Ronnie decided it was time to realise his dream and become a full-time artist. Along with painting, he also did some framing. His attention to detail was amazing and everything he produced was beautifully done.

He sold his first painting in 1958. In 1967 he was invited to hold an exhibit at the Carlart Gallery in Port of Spain. He also did shows in Susex, Dominica, Barbados, St. Lucia and, of course, in Guyana. In 1970 he was invited to coordinate the mounting of CARIFESTA 72, 36 exhibitions across Guyana – quite an honour!

In 2010 he exhibited at the National Gallery in Guyana with a show called “Evocations”. It was inspired by his readings of some of Guyana and the Caribbean’s finest poets and writers. He also did a show highlighting the poetry of Ian McDonald, a collection entitled Essequibo, and a solo exhibition at the Gallery of Caribbean Art in Barbados. He was also part of an exhibition of Guyanese Art in Caracas called “Togetherness in Guyana” in 2002.

In 1979 he moved the family to St. Lucia. He opened his studio up on the hill on “L Anse Road. His themes slowly changed to the flora and landscapes of St. Lucia. He painted the Caribbean Sea and the islands. He also did framing and painted post cards. He painted the St. Lucia Rainforest and the Pitons.

In the 90’s he was contracted to decorate the interior walls of old Barclays Bank (now GBTI) on Water Street in Georgetown with his artwork. The paintings are amazing.

I remember when he discovered the internet and email. Then he got Magic Jack; he could not understand that you could talk for a long time at no cost. He kept trying to hand the phone to Sheila so we could chat to her before the money ran out!

He was a revolutionary! A non-conformist! A rebel!

He was special! He was a theorist! There was his theory of “evolution”. There was the story of how the white man impeded the progress of the black man. Did you know that black people came to Guyana from Africa before slavery? According to Ronnie, this was evidenced in the style of the paintings found on the rocks that obviously pre-dated the Amerindian style.

He did not have too much time for material things. Just those things that was absolutely necessary. In many ways he was like his aunt Lilian whom he adored. I don’t remember ever seeing him in a suit. He didn’t care too much about stuff like that. He was always simply dressed and he loved to be “cool”.

There was another side to this complex man. He not only loved listening to music – he also played. He played the steel pan. In 1956 he conducted the Symphonia Steel Band in the production of “Stabroek Fantasy”. The show was produced and choreographed by Helen Tait, sister of his good friend Clairmont. It was centeredaround a group of hucksters in the Stabroek Market. The music for the show was written by Ronnie’s long time friend Hugh Sam, and produced by Ronnie and another of his long-time friends Michael Gilkes.

He did things his way. He never uttered an unnecessary word. He always paused to think before he spoke.

He loved his family. His loved his mother and visited her as often as he could. He loved his friends. When Ronnie was your friend, you had a friend for life!

We will all miss him.

Guyana has lost one of her proud sons. Ronnie loved his country. He may have made St. Lucia his home but we know part of his heart was always in Guyana.

He always spoke of the lack of appreciation for his art throughout the Caribbean. He always felt under-appreciated!

Let us stop and appreciate the man!

He was brilliant, complex and funny!