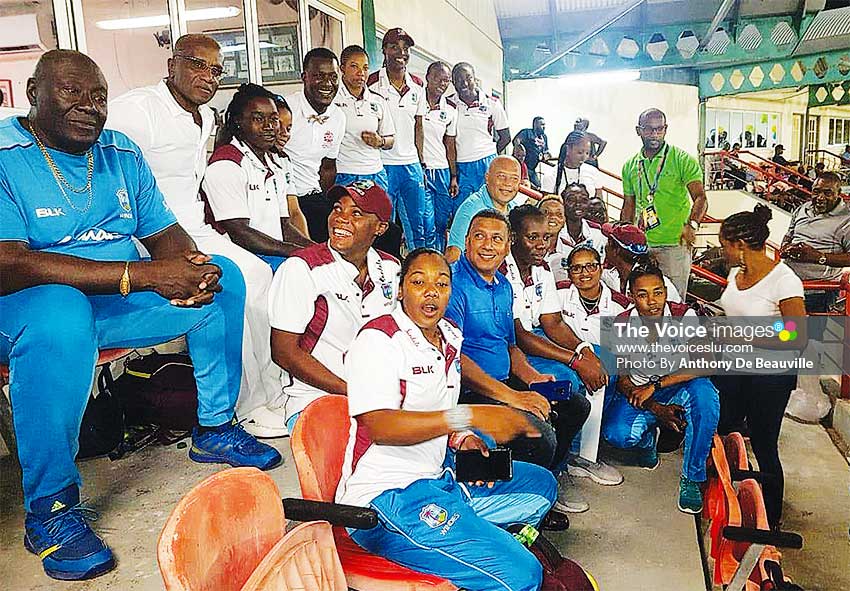 The last day of the Group stage of the ICC Women’s World T20 2018 threw up an engrossing first game at the Daren Sammy Cricket Ground, as the Windies beat England by four wickets in the last over of a thrilling chase. The home side enthralled the 6000-plus spectators with a humdinger of a win to top Group A and set up a clash with Australia in the semi-finals.

The second game of the day was less exciting, as South Africa beat Bangladesh by 30 runs despite their batting having suffered from yet another collapse. The Windies topped Group A with eight points while England finished second with five. South Africa (four), Sri Lanka (three) and Bangladesh (zero) finished in that order.

In the semi-finals on Thursday 22nd November, England will Play India after the home team plays Australia at the Sir Vivian Richards Ground in Antigua.

Meanwhile, the large crowd that came out on Sunday afternoon, the biggest ever for a women’s international in the region  got its money’s worth, as a frenetic ending to the game saw the Windies negate a fine recovery from England.

Fielding first after winning the toss, Windies opening bowler Shakera Selman picked up two early wickets. A mid-innings collapse then reduced England to 50 for six before Sophia Dunkley (35) and Anya Shrubsole (29) put on a 58-run partnership.

The pair was only separated in the penultimate over, helping England to 115 for eight. And it seemed it would be enough when Shrubsole picked up two wickets in her first over, sending back Hayley Matthews and Stafanie Taylor, both bowled. Then Deandra Dottin and Shemaine Campbelle combined for a 68 run partnership.

Dottin (46) was dismissed with the Windies still needing 45, but some bold hitting from Campbelle kept them in the hunt. Needing 26 off the last 18 balls. Campbelle was dropped twice in the penultimate over, but helped the Windies get close enough; they hit the five runs that remained in the last over, much to the delight of the crowd.

Windies’ Deandra Dottin, who was Player of the Match, said: “To be honest, it wasn’t any pressure (to be opening the batting in this tournament). I know what kind of player I am. I can go hard. I can go medium. I can knock it around. It all depends on the situation. But knowing that you have a six overs power play, you would like to capitalize. Well, my partner Shemaine Campbelle, our discussion was to build a partnership and stay there until the end. I just want to commend her on the inning she played as well. It was a crucial inning she played. And that helped the whole game as well.”

England captain Heather Knight said: “The way she (Sophia Dunkley) played, she hits very unusual areas as a cricketer. She’s very hard to set fields to, having captained against her previously.

“So to show that composure under that amount of pressure, in front of that sort of people, 10,000 people, whatever it was. So I am really pleased for her. She’s worked so hard. I thank  having Anya (Shrubsole) out there to keep her calm and very relaxed. And seeing Anya’s batting as well was a real talking point.”

Player of the Match:  Deandra Dottin.

In the second game on the evening, South Africa defeated Bangladesh by 30 runs. South Africa: 109 for 9 in their allotted 20 overs MarizanneKapp 25. Bowling for Bangladesh,  SalmaKhatun 3 for 20, Khadija Tul Kubra 2 for 18.

Player of the Match:  Marizanne Kapp.