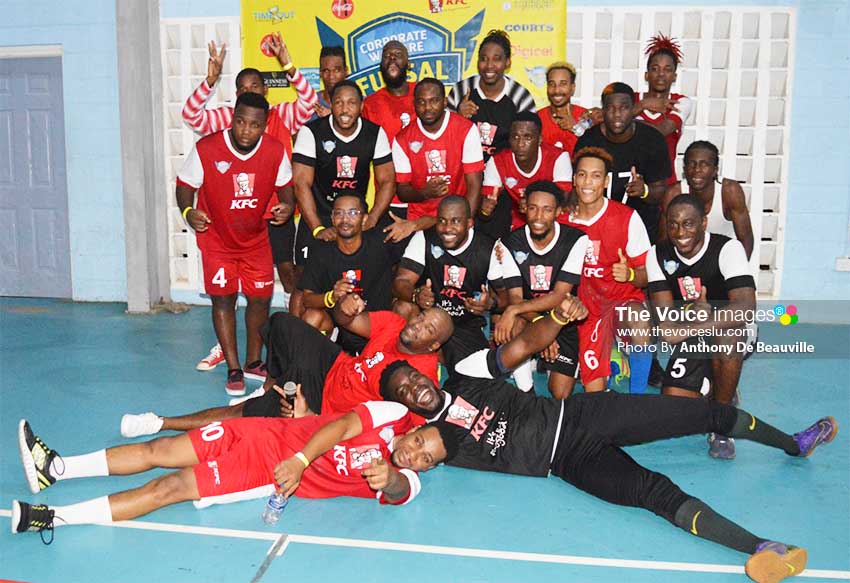 Following all the excitement, loud shouts and rivalry on centre court last evening in the quarterfinal round in the 2018 Corporate Warfare Futsal Tournament organized by Timeout Entertainment Saint Lucia, the Beausejour Indoor Practice Facility will come alive again this evening with the return leg of the Celebrity match between Ezra Funmachine and Hollywood HP.

So if you are going to be late for the 6.30 p.m. start, my advice to you, is to complete your house chores and be there at least 1 hour before the doors open to secure your seat.

In Game 1, KM2 Solutions will take on Go Answer 1-888 in what has been dubbed a “Call Centre Derby” between the two.

In Game 2 is scheduled for 7.30 p.m. will feature Fuzion Mas and Just 4 Fun, a game dubbed “Bacchanal Futsal”. It’s going to be lots of entertainment and laughter on centre court.

According to the organizers, they are trying to be innovative in the way they do things so Futsal fans can come in and have an evening of entertainment.

The final game on the evening, the Celebrity showdown between D’funmachine “Ezra” Team versus Hollywood HP Team will kick off from 8.30 pm. It’s a revenge match, dubbed “Part 2”.

Last month when the two teams played each other at the finals of the knockout stage, Hollywood HP Team had the better of Ezra D’funmachine Team 8-5.

As customary, the results of the four matches mentioned in the quarterfinal round and Saturday evening entertainment showdown will be in the Tuesday 27th November edition of the VOICE.

Meanwhile, last weekend there were some upsets in the round of sixteen played at the BIPF.

In game two, Small Business Owners (SBO) had the better of Top Ranking 3-2 in a close matchup.

Game 3, can be considered an upset as Builtec Inc. nosed ahead of WASCO 5-4, a thrilling contest.

In Game 4, the Saint Lucia Teachers Union Credit Cooperatives was made to work hard as they went on to beat Go Answer 1-888, 3-2 in a very exciting encounter.

In game 2, Telecommunication Company FLOW and PCD played to a 5-5 draw after regulation time, however, the defending champions, PCD squeezed past their opponent 6-5 on penalties.

In the final game on the night, the Saint Lucia Teachers Union brought the House down with a convincing 5-3 victory over Bel Jou.