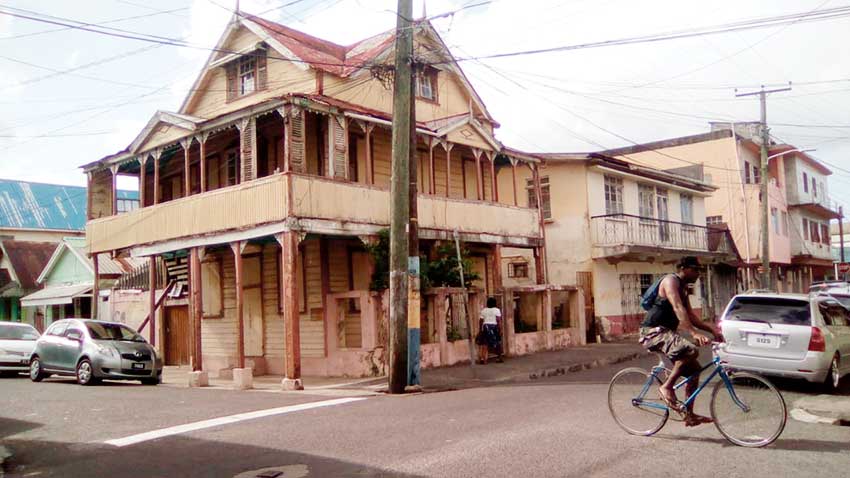 PRESS RELEASE – The Saint Lucia National Trust (SLNT) is saddened by the destruction of the colonial-era historic ‘Glasgow’ townhouse and other nearby properties, which were burnt by fire during the early morning of Tuesday 30th October, 2018. The Glasgow House was located at the north-eastern corner of the junctions of Mary-Ann and Broglie Streets, in Castries. It was one of a small and dwindling number of pre-1948 structures found in the Castries City Centre.

This year, in collaboration with the Castries Constituencies Council, the Cultural Development Foundation, Ministry of Infrastructure, Ports, Energy and Labour, Mediazone and Ministry of Economic Development, Housing, Urban Renewal, Transport and Civil Aviation Survey & Mapping Section, the Trust put on an exhibition memorializing the 70th Anniversary of the Great Castries Fire of 1948 and created a documentary recording memories of a number of those who lived through the experience. This fire led to the loss of much of the Castries’ colonial era built heritage, destroying over 24 acres of the city and displacing scores of city residents. Now, 70 years later, a building which survived that Great Fire has succumbed to yet another fire.

Through the work of the Saint Lucia Archaeological & Historical Society established since 1954 and the National Trust established in 1975, numerous efforts have been made at attempting to conserve our island’s heritage, including its buildings of architectural merit. Sadly, however, the continued redevelopment of Castries and many of our built-up areas have happened at the expense of our traditional architecture. This architecture has immense value in terms of defining our sense of place and identity but is also important in providing value and character to the places in which we live, work and relax.

A very early attempt at listing such buildings was encapsulated in the National Trust’s publication of Saint Lucia Historic Sites in 1975, authored by the Trust’s founding Director, Historian, Mr Robert Devaux. In 2014, the Trust injected new life into its Built Heritage Programme by bringing on-board a full-time Built Heritage Officer. It commenced the Walcott Place and Grass Street Urban Enhancement Project, which had as one of its broader mandates the catalysing of urban renewal around the Lower Chaussée, recognising the value of conserving what is essentially Castries’ Historic Quarter. One of these structures included in that area was the Glasgow House.

Concurrently, the SLNT collaborated with the Technical Department of the Sir Arthur Lewis Community College in which second year students carried out risk assessments of 250 historic buildings island wide to determine what was left of our Built Heritage. Students carried out measured surveys and historic research on these buildings to determine whether they were suitable for being included on the Listing of Buildings register. As a result of this assessment the Glasgow House was included in the Trust’s register of historic buildings, based on its age and rarity, historic significance and architectural merit. The house was a rare example of a 2-level early 20th century wooden townhouse and showcased significant characteristics of this construction such as the double dormer windows, fretwork and wooden shutters.

The importance of our country’s Built Heritage and other tangible heritage in general has been brought to the forefront of national interest and debate in recent times with the tragic loss of the historic building that housed the Folk Research Centre at Mount Pleasant, on March 25th this year, and ongoing discussions regarding both the fate of specific buildings in Castries and the revision of plans for the overall development of the capital. This new loss of the Glasgow House has fuelled these flames and shows the fragile state of our heritage.

The listing of buildings, monuments and sites is an ongoing and open-ended process. As time passes, buildings currently not considered of sufficient merit to be listed, may become so and others may be lost.  The listing process alone will not ensure that these tangible assets are protected, particularly from abandonment. Long term conservation requires a suite of policies and legislation that promotes use, particularly adaptive reuse of these properties to fulfil the country’s development needs. There must be incentives and other benefits to encourage and assist the property owners and developers of properties with historic value to maintain and develop such properties. There is a need for guidelines to assist property developers in conceptualising suitable development schemes that incorporate the built heritage. This should also be supported by access to generous concessionary financing, as building conservation often requires specialised skills and expertise and can be quite costly. Such a framework for built heritage conservation would engender positive socio-economic development, particularly in the historic cores of our towns and villages.

In 2016, the SLNT prepared and submitted to Government, draft legislation to strengthen the protection of buildings of historic and architectural interest. We await the next phase to engage the Ministry of Physical Development and other stakeholders as we look towards a surer future for our built heritage. The loss of the Glasgow House highlights the urgency that must be placed by all concerned in furthering this crucial aspect of a sustainable, balanced development agenda. Despite all the losses and challenges, the Saint Lucia National Trust believes that our island can profit from the current national concern if it commits to rebuilding and renewal that is inspired and invigorated by the valuable architectural and historical qualities of the past.