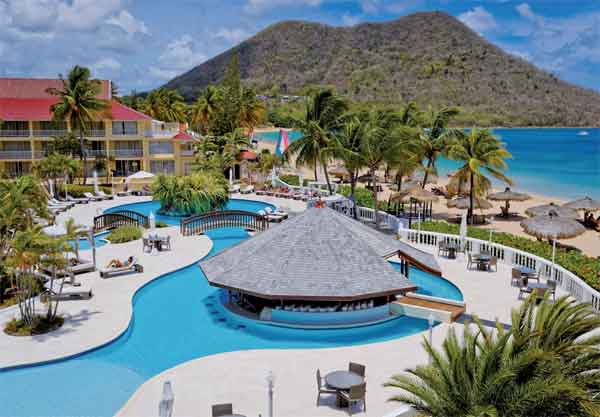 PRESS RELEASE – THE Grenada government on October 16 confirmed that the 212-room Grenadian by Rex Resort has been placed under new management and that its name had been changed to Starfish Resort.

The announcement from Starfish Resort says that three beachfront properties in Saint Lucia, including the Royal Saint Lucia, will be part of the Spanish chain.

“The agreement is between the owners of Rex and Sunwing, so I have no details as yet about the agreement because it’s a private purchase,” said Grenada’s Tourism Minister, Clarice Modeste, noting that representatives from new owners of the Pink Gin Beach property on the south of the island will be arriving in Grenada soon for talks with the government.

Since 2016, the Keith Mitchell government and owners of the property have been in court after the government served notice that it would be acquiring the property in accordance with Land Acquisition legislation.

However, the owners were successful in having the court to issue a temporary order preventing the acquisition.

Modeste said that government was not part of the negotiation and learnt of the new ownership through an official correspondence recently issued by Sunwing Travel Group in which it announced that the Group’s hotel division would begin operating six of Rex Resorts’ Caribbean hotels as part of a newly-formed strategic alliance.

“As part of this landmark agreement, Sunwing’s growing hotel division plans to make significant improvements to each of the resorts over the coming years. We are excited to be entering into this partnership which reflects our commitment to the CARICOM countries of the Lesser Antilles,” said Stephen Hunter, president and chief executive officer of Sunwing Travel Group.

“We look forward to increasing tourism in Grenada, Tobago and Barbados as we have recently done in St. Lucia and Antigua,” he added.

Mystique Royal Saint Lucia will be the first Mystique-branded property in the Caribbean.

The general manager for the Grenada property, Christopher Forbes, said that as of December 1, the new brand and name will be unveiled.

“There are lots of plans for the property but the first thing to happen will be the renaming of the property to the Starfish brand,” he said

The release quotes Alison Palin of Rex Resorts as saying that this strategic alliance will enable the group to rejuvenate and further enhance these popular resorts which are all situated in prime beach locations.

“Leveraging Sunwing’s distribution and scale will allow us to boost our occupancy and tighten our operational costs and ultimately position these properties to provide even more value to our guests. We look forward to the continued support of our valued employees, local suppliers and tour operators as we finalize this exciting and transformational agreement,” she said.

Patrick Creighton, spokesperson for the Rex Resorts, said that not only will there be a new name for Rex properties in Grenada and other regional territories, but there will also be additional investment and enhancement of the properties.

“Rex Resorts has entered into a strategic alliance with the Sunwing Travel Group effective December 1, 2018. At that time, The Grenadian by Rex Resorts will be rebranded Starfish Grenada Resort,” said Creighton.

“This strategic alliance between Rex Resorts and Sunwing will allow for additional investment and enhancements at each location; that’s part of this agreement,” Creighton said in an email in response to other inquiries about the partnership between Sunwing Travel Group and MRI management, the owners of Rex Properties in the region. “It’s our expectation that government will be supportive of this exciting alliance, which will enhance tourism and airlift to Grenada,” he added.